The holidays are in full swing in the White House. First Lady Melania Trump has unveiled this year’s Christmas decorations at the 1600 Pennsylvania Avenue abode and people are already jabbering on about her decor choices on social media.

This year the first family has chosen to follow the theme “American Treasures,” to celebrate the patriotism and heritage of the United States. The Gold Star Family tree is making a comeback this year, decorated by Gold Star Families to honor all of the troops and their families who have made great sacrifices according to a White House Statement.

Step into the China Room and marvel over the three State Tables each adorned with pieces from the White House permanent collection showcasing the Theodore Roosevelt Administration, John F. Kennedy Administration, and Donald J. Trump Administration.

But if there is one decor choice the entire internet is talking about, it’s none other than the trees that line the Grand Foyer and Cross Hall. Twenty-nine trees are dressed with more than 14,000 red ornaments said to represent the stripe found on the seal designed by the Founding Fathers.

However, people are getting some different vibes from the blood-red trees. Some are comparing the photo of FLOTUS with the red trees to remind them of the hallway in The Shining.

Using red in holiday decorations is nothing new, but that still didn’t stop people from poking a little bit of fun at the over-the-top decor. 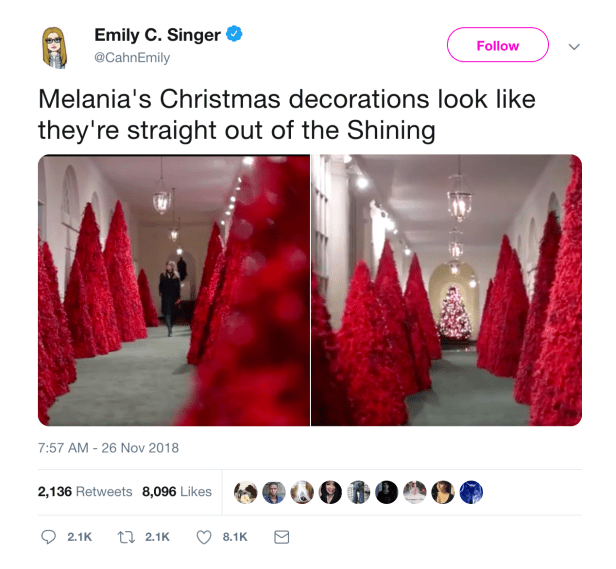 Never fear, there are some traditional green Christmas trees in the house. The official White House Christmas Tree stands 18 feet tall in the Blue Room and features over 500 feet of blue velvet ribbon embroidered with every U.S. State and Territory.

The White House will be open for public tours throughout the entire season, sharing the decor with over 100 open houses and receptions. More than 3,000 people are scheduled to see the decor in person.