Wife of Drunk-Driving Killer Pleads for His Return Home, Public Is Outraged 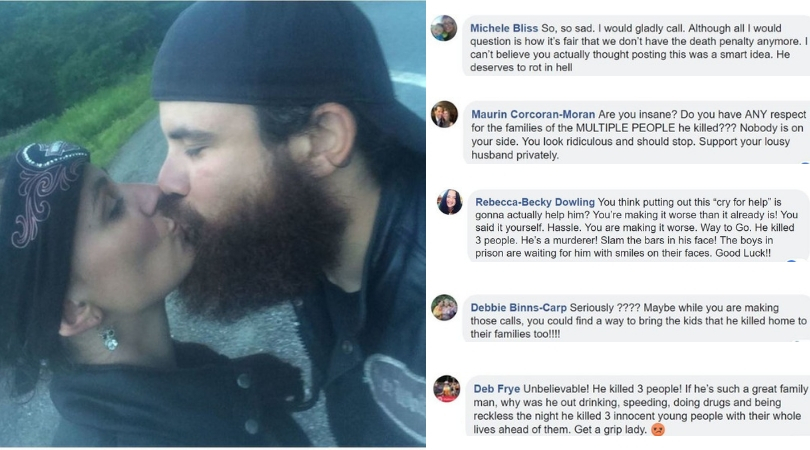 Renee Saconne, Anthony Saccone’s wife, is making headlines after stirring the pot on social media and pleading on Facebook for her husband to be released from jail so he can spend his last days with family before starting a 10-to 30-year prison sentence for vehicular homicide. Anthony Saccone was drunk and high on cocaine, killing three people when he ran a red light at more than 80 miles per hour, hitting another vehicle. Saccone then ran from the scene and went to sleep at his mother’s house, where he was then tracked by a State Police bloodhound and arrested.

According to Renee Saccone, Anthony still has one month to spend with his family until he is sentenced. In the Facebook post, she writes, “So here I ask everyone if you’ve considered him a brother, a friend help me get him home to his boys and family where he should have been for the past 2 months.” Renee has since deleted the post she wrote on September 12th, urging her followers to call the Onondaga County District Attorney’s office and question why he is not out. She asked users to help convince them that bail for her husband should be set since the reason it was not set (the reckless driving charge in July) has been taken away.

District Attorney Bill Fitzpatrick responded in the courtroom to the viral post.

“Phone calls to my office, like that’s going to have an effect on whether or not we decide to let this guy out – suggest that you let him out. Enough is enough. He admitted it in overwhelming detail. He’s overwhelmingly guilty. And the plea was as voluntary and as by the book as can be done in the State of New York.”

It’s safe to say the post did not convince the district attorney, as well as other Facebook users who saw her post and were outraged. Users left more than a thousand comments expressing their opinions. Full of foul language and disbelief, some called Anthony a murderer, slamming both wife and husband for their actions. A user even expressed concern for the victims, stating, “Spend time with his wife and kids? Are you kidding me? What about the innocent kids he killed and their families? They now have to visit at the cemetery to spend time with their loved ones this makes me sick.”

Saccone pleaded guilty on July 25th to aggravated vehicular homicide and leaving the scene of a fatal crash. He is scheduled to be sentenced on October 19, 2018. At a bail hearing on Monday, September 17, Saccone tried to withdraw his guilty plea, telling County Court Judge Matthew Doran that he felt “coerced” into a plea deal with prosecutors. Doran told defense attorney William Sullivan to put his client’s request in writing.

Blasting his request, District Attorney William Fitzpatrick asked how much the victim’s families had to endure for “this maggot” before enough is enough.