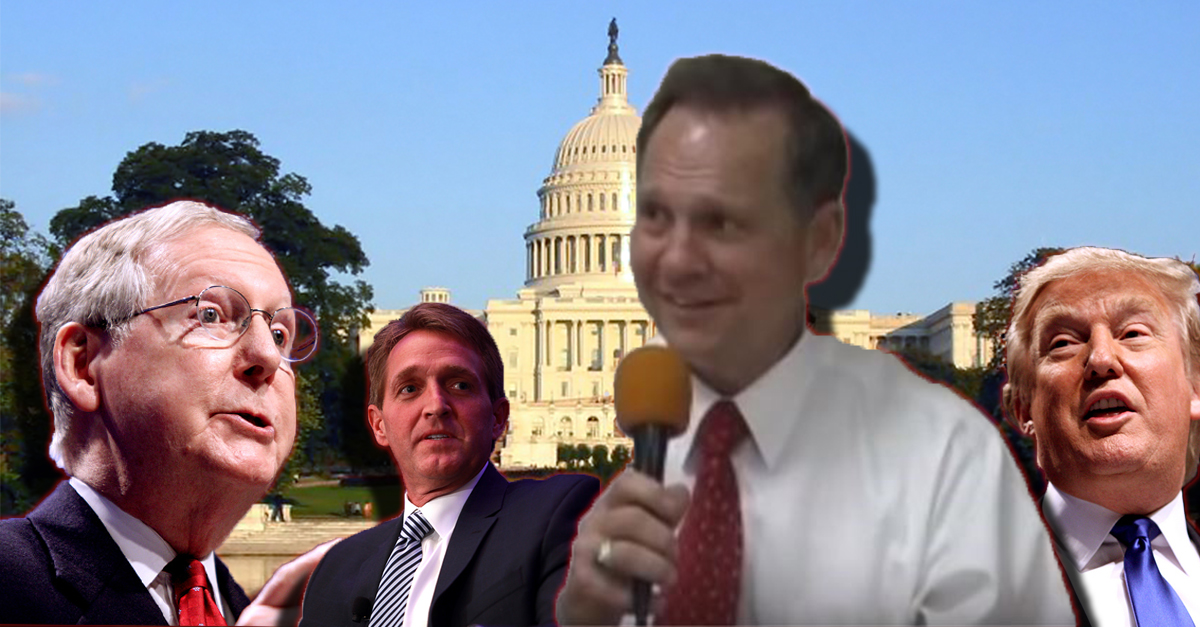 Republican members of the United States Senate have made themselves abundantly clear about not wanting Roy Moore, the controversial Alabama senatorial candidate, as one of their coworkers.

The Washington Post published a damning account on Thursday from a woman who alleged that Moore had inappropriate sexual encounters with her while she was 14 and he was 32 years old. Leigh Corfman said she was only a teenager when Moore offered to watch her outside of a courthouse while her mother went inside for a child custody hearing in 1979. Corfman said Moore made his move several days after their initial meeting:

Alone with Corfman, Moore chatted with her and asked for her phone number, she says. Days later, she says, he picked her up around the corner from her house in Gadsden, drove her about 30 minutes to his home in the woods, told her how pretty she was and kissed her. On a second visit, she says, he took off her shirt and pants and removed his clothes. He touched her over her bra and underpants, she says, and guided her hand to touch him over his underwear.

Three other women have similar stories of Moore from when they were “between the ages of 16 and 18 and he was in his early 30s.” Moore denied the accusations, saying “These allegations are completely false and are a desperate political attack by the National Democrat Party and the Washington Post on this campaign.”

“If these allegations are true, he must step aside,” declared Senate Majority Mitch McConnell on Thursday afternoon, reported Politico.

Since the allegations became public, other Republicans in the Senate have also spoken out against Moore’s addition to their ranks, should he win the general election in December. Axios created a list of other notable Republicans who have asked Moore to step down:

Vice President Mike Pence said, via his spokesperson, that Pence believes that if the allegations against Roy Moore are true, then “this would disqualify anyone from serving in office.”

Sen. John McCain: “The allegations against Roy Moore are deeply disturbing and disqualifying. He should immediately step aside and allow the people of Alabama to elect a candidate they are proud of.”

Former Gov. of Massachusetts Mitt Romney: “Innocent until proven guilty is for criminal convictions, not elections. I believe Leigh Corfman. Her account is too serious to ignore. Moore is unfit for office and should step aside.”

Sen. Lisa Murkowski said, “I’m horrified and if this is true he needs to step down immediately.” She also said she has spoken to Luther Strange about becoming a write-in challenge, ultimately challenging Moore in the Dec. 12 election.

Sen. Jeff Flake: “If there is any shred of truth to the allegations against Roy Moore, he should step aside immediately.”

Sen. John Cornyn, who endorsed Moore and is listed on his website, said the allegations are “deeply disturbing.”

Sen. Pat Toomey: “If there’s a shred of truth to it, then he need to step aside.”

Sen. Richard Shelby: “If that’s true, then he wouldn’t belong in the Senate.”

This is not the first time scandals have rocked Moore’s campaign and image. Moore was removed from his position as chief justice from the Alabama Supreme Court twice. And among the many inflammatory statements attributed to him, Moore once argued that Congress “should act to prohibit” Rep. Keith Ellison (D-Minn.) from taking the congressional oath on account of his Muslim faith.

Despite the scandals, Moore beat Sen. Luther Strange (R-Ala.) in the bid for his party’s nomination. Though President Trump initially threw his support behind Strange, Trump deleted his tweets endorsing Strange and instead tweeted that Moore would help ‘make America great again.’

Spoke to Roy Moore of Alabama last night for the first time. Sounds like a really great guy who ran a fantastic race. He will help to #MAGA!