Road Crew Misspells “School” on Road in Front of a School 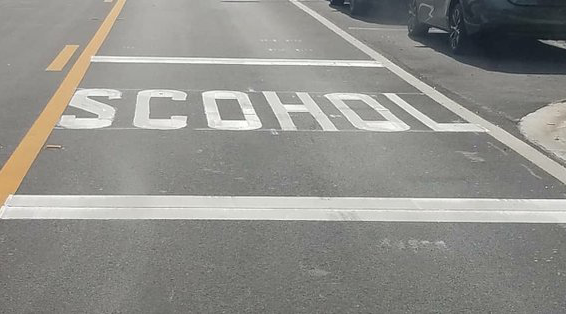 Ha! Idiots! That’s now how you do that! You did it wrong! And now you must be laughed at by the internet for thirty seconds before everyone forgets that this ever happened and moves on to laughing at some guy for rubbing his scrotum on a pony, or something.

But anyway, yeah, this road crew misspelled the word “school” on the road outside a school. How will the cars know to slow down for kids now? They’re going to think, “What the hell is a Scohol? Whatever it is I’m not taking my foot off the gas for it” and then the middle school blood harvest begins.

#UPDATE– This SCHOOL zone striping was handled by the developer's contractor. They have been notified and are working expeditiously to correct. Thank you to all who brought this very important matter to our attention. https://t.co/4YVR82gsrB

The city of Doral, Florida is assuring everyone who is, um, upset(?) about this that it wasn’t their fault. It was their dumb contractor’s fault. Oh sure, fat cat school officials. Blame the working man. Maybe you can tell the kids that they’ll end up doing backbreaking labor if they don’t learn how to spell while you’re at it.

Give the guy who made this mistake a break. He was probably hungover or something. Maybe he wasn’t able to grab coffee that morning. Or maybe he had diarrhea and needed to hurry through the spelling real fast so he didn’t paint the street brown instead. You don’t know this man’s life!

There is real danger here though. Mostly that the egregious spelling error will probably catch the eyes of drivers, who will then no longer be watching the road and, ultimately, slam into a school bus full of young, sweet children. By the time the firefighters put out the inferno created by distracted driving accident, nothing will ever be the same in Doral, Florida.

Watch: Students in These Texas Schools Free of Lunch Debt After Anonymous Donations