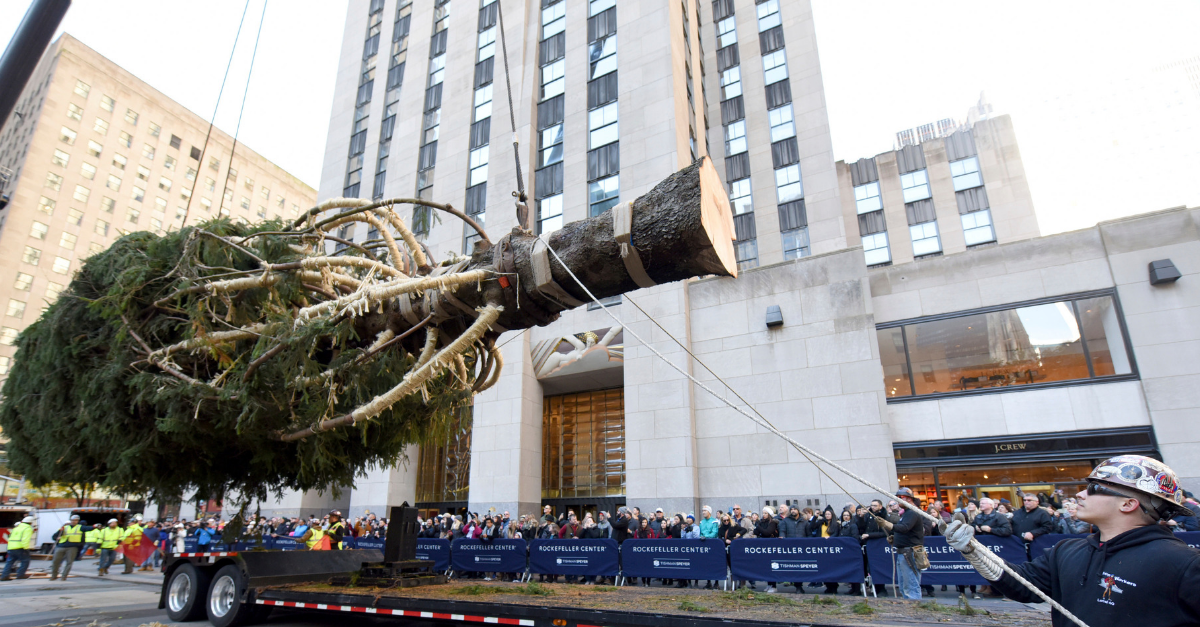 NEW YORK (AP) ? The Rockefeller Center Christmas tree is in place and will soon be strung with 50,000 lights as one of New York City’s star holiday attractions, a gift from a same-sex married couple.

The 72-foot-tall, 12-ton Norway spruce arrived on a flatbed trailer Saturday morning and was hoisted by a crane into a spot overlooking the Rockefeller skating rink. Millions of people are expected to visit the tree, which will stay up till Jan. 7.

Crowds will see the tree burst alive with 5 miles (8 kilometers) of LED multicolored lights and a 900-pound Swarovski crystal star during a televised ceremony on Nov. 28.

The 75-year-old spruce came from Wallkill, 60 miles (96 kilometers) north of New York. It was donated by Lissette Gutierrez and her wife, Shirley Figueroa, from their home property. They nicknamed the tree “Shelby.”

“Now it’s not my tree, it’s the world’s tree; I’m so happy to be able to share her with everyone,” Figueroa said at Rockefeller Center on Saturday. “Millions of people will come to visit Shelby.”

Figueroa, 49, explained that she refers to the tree as “she” because “I felt she has a female spirit.”

Figueroa said that when she and Gutierrez bought their house, the previous owner said Rockefeller Center’s gardener had his eye on the tree. Gutierrez, 47, said she initially was reluctant to give up the spruce, but Figueroa convinced her.

Erik Pauze, the center’s head gardener, also attended the ceremony. He cared for the tree over the summer, watering and feeding it compost tea as the couple watched outside their home.

After the tree is dismantled, it will be donated to Habitat for Humanity to help build housing.

The legacy of the famed New York holiday tree reaches back to Christmas Eve in 1931, during the Great Depression. Workers building Rockefeller Center pooled their money to buy a 20-foot tree they decorated with garland handmade by their families.

Two years later, Rockefeller Center officials made the tree an annual tradition, starting with the first lighting ceremony in 1933.