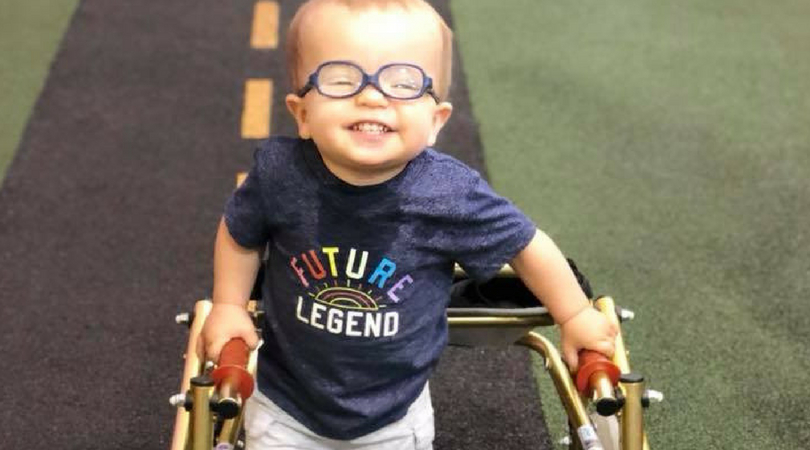 A 2-year-old Roman Dinkel was spreading smiles all over the internet, after his mother, Whitney Dinkel, shared a special video of the little boy walking for the first time. In 2018, the adorable boy became viral on Facebook, celebrating his first steps alongside his dog. In the video, you hear Roman telling his pup, “Look, Maggie! I’m walking, Maggie!” The video became an overnight sensation due to the toddler’s improvement, after being diagnosed with spina bifida when his mother was 20 weeks pregnant.

Spina Bifida usually occurs when the spine and spinal cord don’t form properly. Scientists aren’t really sure how the defect is caused by but believe that genetic and environmental factors act together to cause the condition. It is the most common permanently disabling birth defect in the United States. In Roman’s case, during a prenatal ultrasound, the family discovered he had extra fluid on his spine and his brain. The parents were determined to persevere despite the odds, which is why while in utero, Roman underwent a surgery meant to improve the functional movements he’d have in his legs after being born, as well as breathing issues.

Roman was born on May 5, 2016, and with the help of chiropractic and physical therapy has begun to start using a walker to practice walking by himself. This week, the toddler used his crutches to take his first steps independently, which is why you can hear the excitement in his voice in the videos.

The family, who currently live in Overland Park, Kansas, also have two other children beside Roman. They have a Facebook page called, “Defying Odds: Roman’s Journey”, where the family shares all of his videos, congratulating him for his achievements. The videos have garnered millions of comments and reactions from people around the world. The family stated these comments help Roman improve his mood, changing his life for the better by seeing he is not alone in his journey.

There it is, this week’s 7-second reminder to never give up, courtesy of little Roman Dinkel. Truly makes you appreciate life.

Editor’s note: This post was originally published on August 13, 2018.