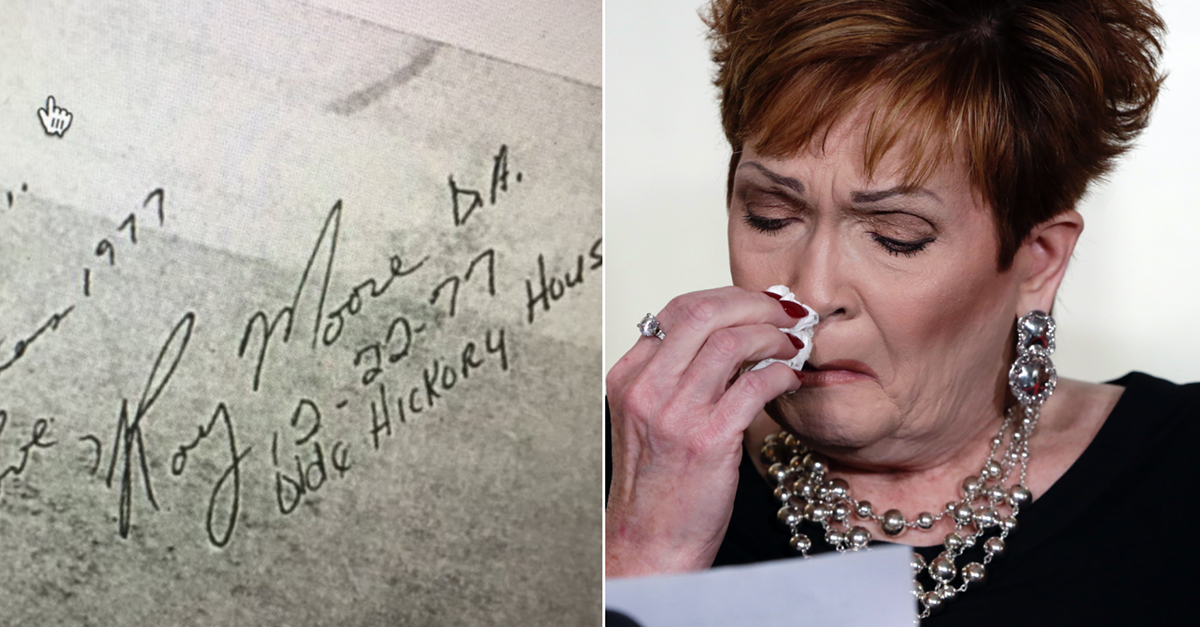 In a Monday morning news conference, the fifth woman to accuse Republican Senate Candidate Roy Moore of sexual assault showed reporters a high school yearbook that she says was signed by Moore.

Moore’s accuser, Beverly Young Nelson, claims that she was 16 years old during her encounter, which occurred prior to Moore signing her yearbook. According to Nelson, Moore offered to drive her home from work at a restaurant he frequented, and instead tried to sexually assault her.

Ms. Nelson's printed statement includes a picture of Moore's note in her yearbook…

“I tried to open my car door to leave, but he reached over and locked it so I could not get out. I tried fighting him off, while yelling at him to stop, but instead of stopping he began squeezing my neck attempting to force my head onto his crotch. I continued to struggle,” Nelson told reporters. “I was determined that I was not going to allow him to force me to have sex with him. I was terrified. He was also trying to pull my shirt off. I thought that he was going to rape me. I was twisting and struggling and begging him to stop. I had tears running down my face.”

RELATED: With tears in her eyes, a Trump supporter comes forward with a new tale in the Roy Moore story

Once Moore gave up, Nelson says she was either pushed out or exited the vehicle on her own accord. She alleges that her neck was covered in bruises the next day. For several decades Nelson didn’t mention her story to anyone, out of a fear for Moore who was a very powerful Alabama attorney and judge. Allred claims that Nelson is prepared to swear under oath that Moore tried to force her to perform oral sex in the car.

Moore, who has denied all allegations against him, doesn’t think so.

“The person who should step aside is @SenateMajLdr Mitch McConnell. He has failed conservatives and must be replaced. #DrainTheSwamp,” Moore wrote on Twitter.

The person who should step aside is @SenateMajLdr Mitch McConnell. He has failed conservatives and must be replaced. #DrainTheSwamp