A Russian activist is taking a stand against “manspreading” on public trains, and pouring a bleach solution onto men’s crotches in the process. On September 25, law student Anna Dovgalyuk posted a video on YouTube of a woman on a St. Petersburg-area train car, pouring the chemical solution from a water bottle.

Against “gender aggression,” the 20-year-old activist defines “manspreading” as the habit of men who sit with their legs wide open in the subway, and other forms of public transportation, taking up more than one seat. The controversial video had its legitimacy questioned after the Russian government stated it was an online stunt. After being accused of using actors, the activists told several Russian news outlets that the video was real, and was able to use her friends at witnesses that actors were not used. In a span of one day, the video gained worldwide attention and has been viewed over 1.2 million times.

The student added that the video was produced on behalf of everyone who endured the manifestation of men declaring their “macho qualities” on public transportation. Dovgalyuk, who studies law, decided to mix 30 liters of water and 6 liters of bleach to create the concoction. She explained how the solution is 30 times more concentrated than the mixture used by anyone who is doing laundry.

The solution eats colors in the fabric in a matter of minutes, leaving a washed out stain. People can easily spot the “manspreading culprits” from their bleached-out laps, showing people the body part that “controls the behavior of the men”.

The student dedicated the video to all men who believe manspreading is the norm of conduct. This is not the first time the ‘social activist’ has made headlines. She previously attracted attention by flashing her underwear to commuters, raising awareness for Russian laws on upskirting. What is upskirting? It is a term used to describe the act of secretly taking a photo under someone’s skirt without their permission.

Several critics questioned her motives, asking how she was countering the menace of upskirting by flashing her underwear. She answered, “I am a social activist who advocates for women’s rights and against discrimination in any form.” The video was dedicated to “all who love to peek under skirts.” It was Dovgalyuk’s call for authorities to make upskirting a criminal offense. 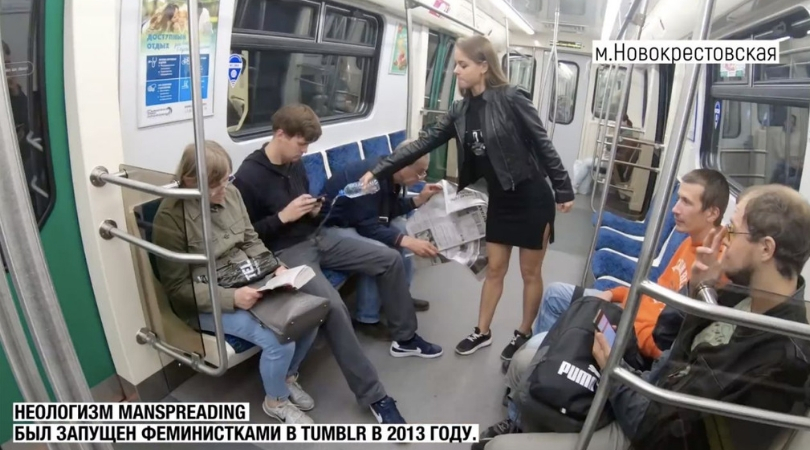