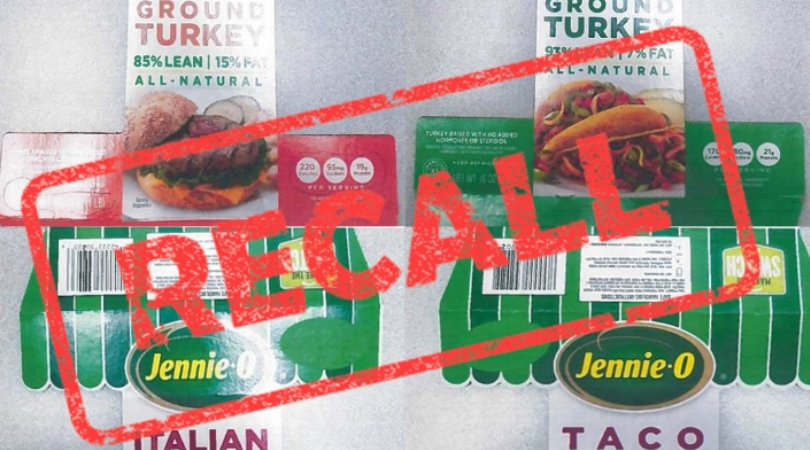 Thanksgiving is less than a week away, but federal health officials are still trying to identify the source of the salmonella illness outbreak. The outbreak has been linked to raw turkey products that have spread through 35 states, sickening 164 people. The latest recall came from Jennie-O Turkey, recalling 91,388 pounds of raw ground turkey products.

The USDA found that samples of the products tested positive for salmonella, matching the outbreak strains. The samples were from a September 11, 2018 production, shipping nationwide.

The following are the recalled products:

Check your freezer! Jennie-O-Turkey is recalling more than 91K pounds of raw turkey due to possible salmonella contamination→https://t.co/V4ChXPMje6 pic.twitter.com/Pu5GJ1XOMX

The US Centers of Disease Control and Prevention first announced the outbreak linked to raw turkey in July. One person in California has died and 63 have been hospitalized. Consuming these products can cause salmonellosis, the most common bacterial foodborne illness.

Symptoms include diarrhea, abdominal cramps, and fever within 12 to 72 hours after consumption, usually lasting 4 to 7 days. Consumers who have purchased Jennie-O products are urged not to consume them, and all products should be thrown away or returned to the place of purchase.

It looks like you might want to double-check what you are putting on your Thanksgiving table this year after there have been more than 74 cases of Salmonella reported linked to raw turkey products. According To the Center for Disease Control and Prevention, the outbreak was announced in July, but more people have gotten sick throughout the year, bringing the count to a total of 164 in 35 states.

Federal officials reported an 82 percent increase in the number of confirmed cases. One person in California passed away due to the outbreak, and 63 people have been hospitalized. The first patient infected from the outbreak strain became ill on November 20, 2017, with the most recent being on October 20 of this year. The confirmed patients range in age from less than 1-year-old to 91 years old.

Of the 85 patients who were reported six, more than half (44), reported eating or handling raw turkey products before becoming sick. It is unclear when experts linked turkey to the outbreak, but three of the 85 worked in a facility that raises or processes turkeys or lived with someone who did. There is no centralized distribution meaning it might be ?widespread? in the turkey industry and there is no common supplier identified at this time.

Lab test shows the salmonella outbreak came from a variety of products, in ground turkey and turkey patties, as well as live turkeys and turkey pet food. CDC along with the US Department of Agriculture is working with the industry, and asking what steps could be taken to reduce any sort of contamination.

Symptoms of salmonella infection include diarrhea, fever, stomach cramps and usually last four to seven days. Most people are able to recover without treatment, but in rare cases, the infection can cause death if a patient is not treated promptly with antibiotics. Symptoms can occur within 12 to 72 hours of eating contaminated food. In the United States, there are an estimated 1.2 million salmonella cases annually, with the main blame for 1 million of these illnesses being uncooked food such as raw meat or raw chicken.

Food that is contaminated with Salmonella bacteria usually does not smell, taste, or look spoiled. Anyone a become with the infection, but children, infants, seniors, and people with weakened immune systems are at higher risk of serious illness.r

The CDC wants to remind to those who handle raw turkey to wash your hands after touching it and cook it thoroughly to avoid getting sick and use separate cutting boards. Experts also recommend thawing turkeys in the refrigerator and not the counter to avoid any foodborne illnesses or potential salmonella.

Watch: How to Score a Turkey Slam