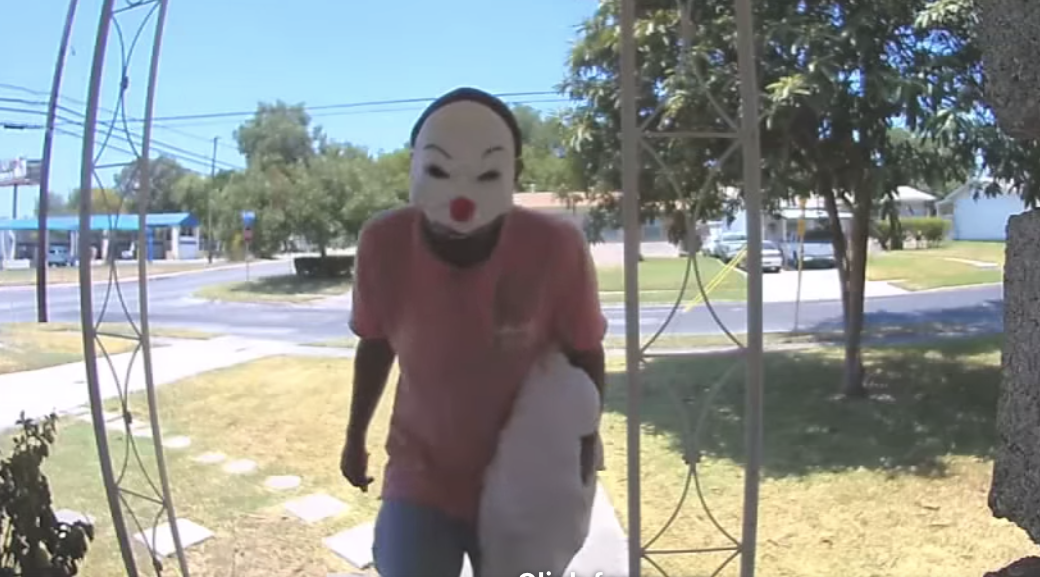 A woman from San Antonio, Texas, was notified by the Ring doorbell camera on her front door that she should probably move as far away as possible from where she currently lives when the app on her phone connected to the home surveillance video shows a terrifying creepy clown man attempting to get into her home.

The man, who was also carrying some sort of pillowcase or sack, added to the creepiness by saying, “trick or treat” multiple times (and also a “trick or treat, smell my feet”) while at the door. He then looked under the doormat for a key but didn’t find one. He left shortly after.

So yeah this is terrible. Ring doorbell cams should come with an optional feature that harkens back to medieval castles. Specifically, Ring should have an option where you can have two guys standing on your roof ready to pour boiling hot oil on potential trespassers and then shoot flaming arrows at them. That’s really the only rational response to something like this clown murderer bold enough to stroll onto someone’s porch in broad daylight and ask them to smell his feet. Scorched Earth.

The homeowner was so scared by the incident that they refused to be interviewed on TV about it. They gave the footage to local news in San Antonio but beyond that they really did not want to be identified. Hard to blame them.

Neighbors were equally terrified of the incident, calling it “creepy” and “scary” –both understatements in the same way calling Florida “a weird state” is an understatement.

San Antonio police were, of course, alerted to the incident and kept an eye out for their city’s own personal Pennywise. Though really they should drop everything they’re doing and comb the city for this actual monster until he’s found.

Editor’s note: This article was originally published on August 22, 2019.