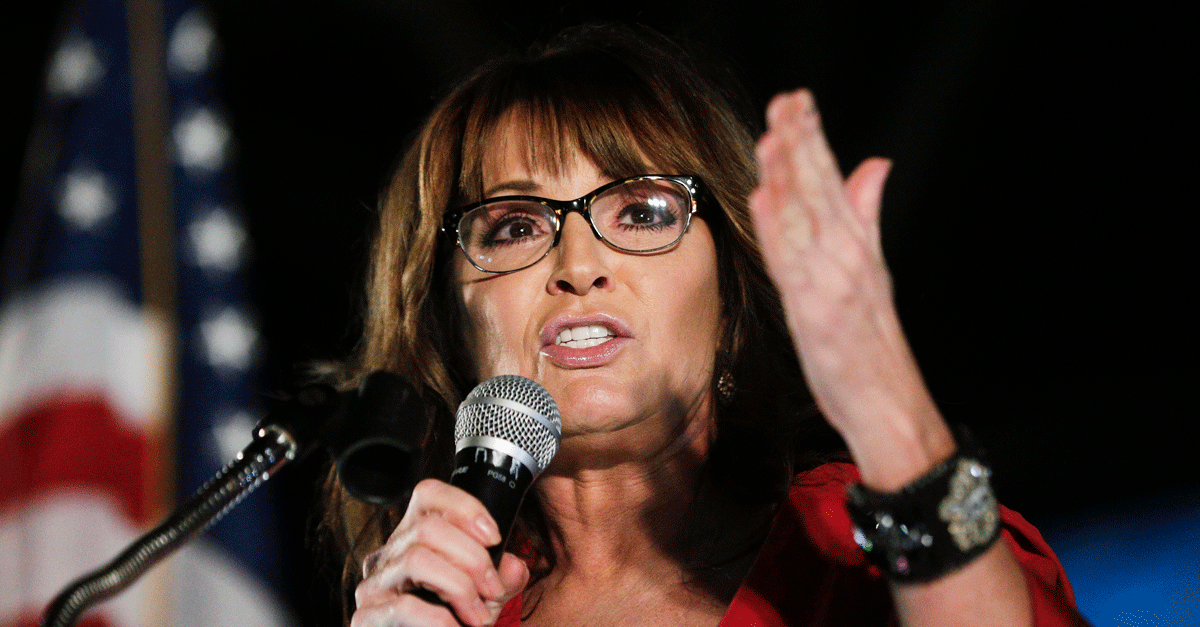 When can you ever take Sacha Baron Cohen seriously? The star, whose character and movie Borat, built his reputation on sheer bizarre humor. While you might not always get the British comedian’s style or wit, it can’t be denied that Cohen has both the star power and humor to play a few pranks now and then. Did he go too far this time, though? Sarah Palin thinks so.

As part of his new Showtime series, “Who Is America?,” Sacha Baron Cohen will interview prominent figures in American politics and pop culture. The show premieres Sunday, July 15 on Showtime at 10 p.m. ET/PT. The first episode teased clips of former Vice President Dick Cheney. Yes, Cohen really does ask him to sign a waterboard kit.

It seems, though, that not all of his guests were pleased with the premise of the show. Sarah Palin took to Facebook to address the instance in which she said Cohen “duped” her. Here’s the full text of the Facebook post.

I join a long list of American public personalities who have fallen victim to the evil, exploitive, sick “humor” of the British “comedian” Sacha Baron Cohen, enabled and sponsored by CBS/Showtime.

This “legit opportunity” to honor American Vets and contribute to a “legit Showtime historical documentary” was requested of me via a speakers bureau.

For my interview, my daughter and I were asked to travel across the country where Cohen (I presume) had heavily disguised himself as a disabled US Veteran, fake wheelchair and all. Out of respect for what I was led to believe would be a thoughtful discussion with someone who had served in uniform, I sat through a long “interview” full of Hollywoodism’s disrespect and sarcasm – but finally had enough and literally, physically removed my mic and walked out, much to Cohen’s chagrin. The disrespect of our US military and middle-class Americans via Cohen’s foreign commentaries under the guise of interview questions was perverse.

Here is my challenge, shallow Sacha boy: go ahead – air the footage. Experience tells us it will be heavily edited, not pretty, and intended to humiliate.

The challenge is to Cohen, CBS and Showtime: donate all proceeds to a charitable group that actually respects and supports American Vets. Mock politicians and innocent public personalities all you want, if that lets you sleep at night, but HOW DARE YOU mock those who have fought and served our country.

And as an aside, for further insight into the wealthy corporate enablers of this kind of “joke”, I’ll add that after great costs on our part in time and resources to contribute to their “documentary” the Cohen/CBS/Showtime production team purposefully dropped my daughter and me off at the wrong Washington, DC airport after the fake interview, knowing we’d miss all flights back home to Alaska. After refusing to take our calls to help get us out of the bind they’d put us in for three days, I wrote this off as yet another example of the sick nature that is media-slash-entertainment today.

Feel good and manly about your M.O., Sacha?

By the way, my daughter thinks you’re a piece of ****, Sacha. Every honorable American Vet should feel the same.

Let’s recap. Republican Sarah Palin thought she was flying across the Atlantic to interview with a disabled US veteran. However, the veteran, as Palin believes, was comedian Sacha Baron Cohen heavily disguised and in a fake wheelchair. What she thought was a thoughtful piece of journalism turned into, once she arrived, a joke at her expense instead of a long ‘interview’.

What outrages Palin the most is the fact that Cohen disrespected the US military and middle-class Americans in the interview, though she believes that creative editing will tell a story intended to humiliate her instead. Will you tune in to his new show to see how it plays out?