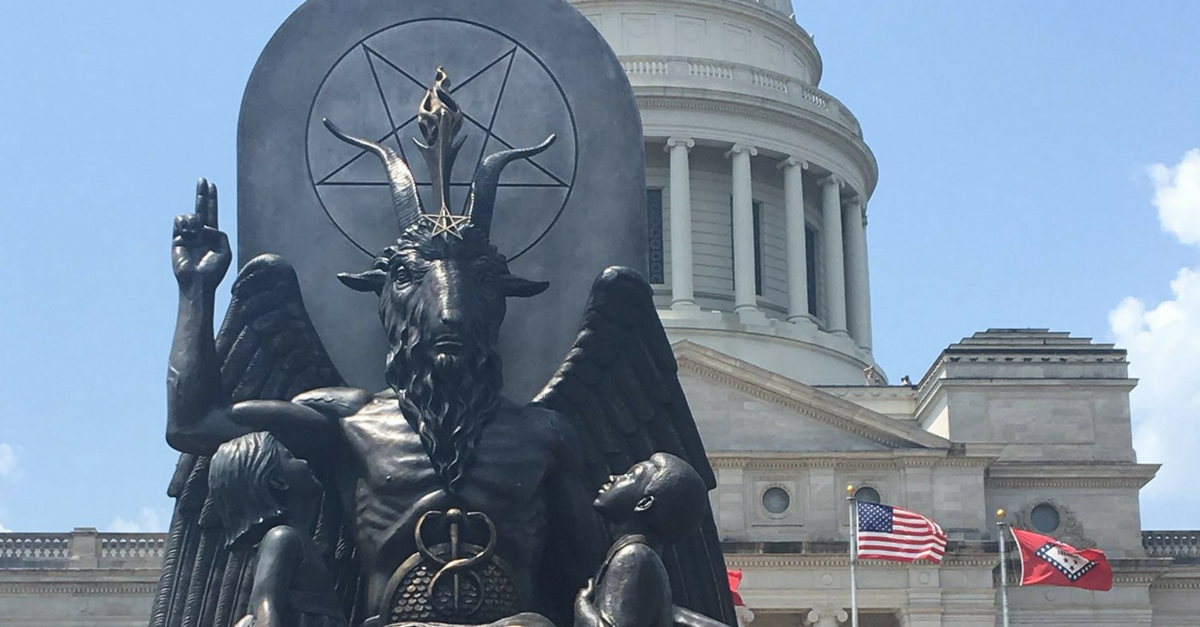 Calf’s blood rained across the lawns of the Arkansas State Capitol building and turned the once green space red. A black spot blotted out the sun, covering the land in darkness. Men laid with pigs. Children were swallowed by serpents. Soccer was played. Above it all the mighty Baphomet grinned and sipped mead from a skull.

Those are all things you probably assume the purveyors of a self-proclaimed “Satanic Temple” would be pretty psyched to see happening at one of their demonstrations but, actually, that’s not the case. The Satanic Temple is really a sort of friendly troll that shows up to lightly gibe — but not demean — Christian groups that they feel are acting against science, overstepping their bounds or, in this case, violating the First Amendment.

NOW: The Satanic Temple is rallying around their Baphomet statue at the Arkansas State Capitol. #arnews #arpx pic.twitter.com/AgO4CESKMq

The Satanic Temple gathered at the Arkansas State Capitol building in Little Rock, Arkansas to protest the erecting of the Ten Commandments on the Capitol’s grounds, arguing that it violated the First Amendment and the separation of church and state. Then the church unveiled their own holy statue of Baphomet and demanded their statue be put up along with the commandments monument so as to avoid any potential religious discrimination and to promote religious tolerance. Baphomet is a half goat, half man deity that the Knights Templar were once accused of worshipping by the Catholic Church to discredit the group, and the type of thing that is displayed above orgies that do not end well.

“Come on, we’re only gonna sacrifice a couple virgins a month under it,” Satanic Temple leader Cyrus Fourneau did not say because he doesn’t exist.

The actual Satanic Temple leader, Lucien Greaves (whose name is very Satanic Temple-y), insisted his group’s intention was simply to promote inclusivity and protest the legislature’s effort to favor one religion over others.

To counterprotest the Satanists and their Baphomet statue at the Arkansas Capitol, church groups showed up with bible verse signs to spread God’s love and remind the Satanists that the Arkansas legislature overwhelmingly approved the measure to put the Ten Commandments on the Arkansas State Capitol grounds, and went through a rigorous and open legal process in order to accomplish it.

Also, these guys for some reason showed up to remind everyone that Arkansas used to have slaves and lost the Civil War.

These guys tell me they’re “witnesses to Christianity” not here to support or rally against the Satanic Temple rally at the Arkansas State Capitol. #arnews #arpx @KATVNews pic.twitter.com/rsTi3MGJ6Z

Republican Arkansas State Senator Jason Rapert also had strong words for the Satanists. Though he assured his constituents that he believes in the First Amendment Rights of all, he forcefully concluded in a lengthy Facebook post that, “Our rights to build a monument were exercised through the electoral and legislative processes and have been upheld by the judicial system. They are no less sacred than the freedoms of a shrill few, for whom legal and political rights are merely methods to fleece the gullible and entertain the cynical.

No matter what these extremists may claim, it will be a very cold day in hell before an offensive statue will be forced upon us to be permanently erected on the grounds of the Arkansas State Capitol.”

Long story short the Arkansas state government is not going to erect the Satanists’ goat man statue. Still, though, the Satanists proved their point which is… that they have a statue of a goat-headed man, mostly, because nothing real was accomplished.

This story as originally published August 17, 2018.

WATCH: NEED SOME LAUGHS? CHECK OUT THESE FISHING JOKES [PICS]