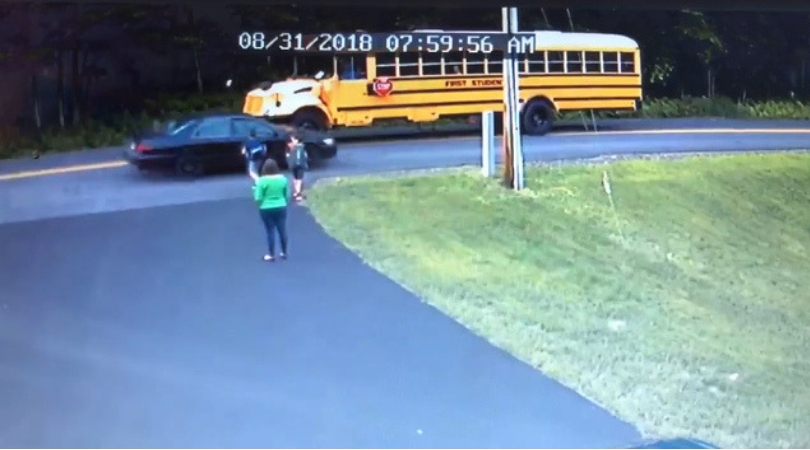 A New Hampshire father is warning people of the dangers of distracted driving after his seven-year-old son was nearly hit by a car while walking to his school bus on the other side of the road. David Cota-Robles’ shared a Facebook post of the surveillance footage captured outside his home in Gilford. The video shows his two sons walking on the driveway, accompanied by a woman and waiting for the stoplights on the bus to turn on.

The seven-year-old was about to cross the street when a driver sped through the stop sign, presumably going above the speed limit. The boy is seen taking a step back and places his arms up in shock looking back and forth at the woman. The father shared the post, saying he was torn over the video due to people ignoring bus safety rules.

David stated the boys were shaken up,  but thankfully none of them were hurt. Authorities are now looking for the driver who ran the light and stated they will be given the appropriate consequences, after it is illegal in all 50 states to pass a school bus that is stopped to load or unload children. They are reminding drivers to follow the law and stop for any school bus, urging them to slow down and respond to the stop sign when they see children near the road.

According to the National Safety Council, most children who lose their lives in bus-related incidents are 4 to 7 years old. The children are usually walking and are hit by the bus itself, or by motors illegally passing a stopped bus. Authorities recommend allowing a greater following distance if you are driving behind a bus, than if you were driving behind in a car. It will give you more time to stop once the yellow lights are flashing.

Some traffic safety to remember in order to keep children and other pedestrians safe include: