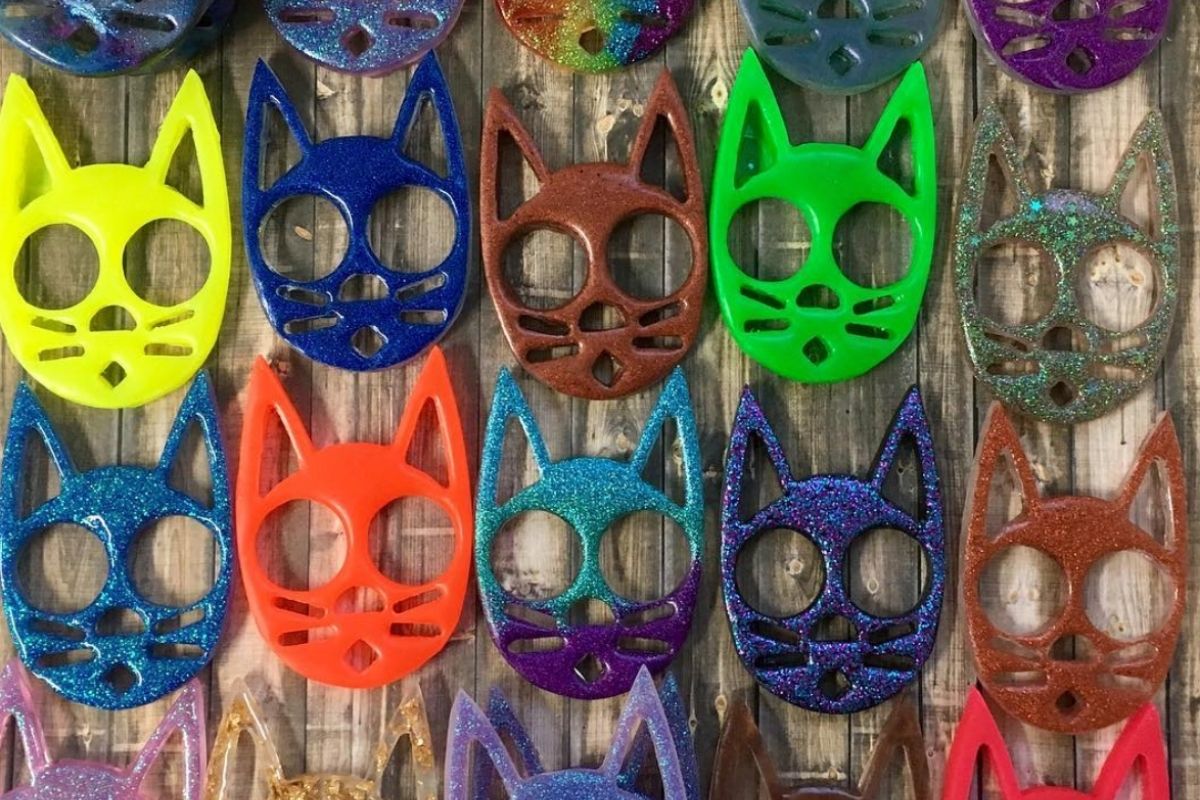 The time came for Texans on Sunday September 1, 2019, self-defense keychains will officially be legal. The legality of self-defense tools includes brass knuckles, clubs, and self-defense wild kat keychains and keyrings. Texas Governor Gregg Abbott signed House Bill 446, the self-defense bill, that legalizes the carrying of certain self-defense items, beginning September 1, 2019. That’s right, y’all. That $4,000 fine or threat of jail time is no longer on the table. The bill legalizes brass knuckles, clubs, and self-defense wild kat keychains. These terrifying keychains are made of plastic, mind you. They are, particularly, weapons of mass fury. Of course, anyone who’s owned these keychains calls them kitty keychains, as I did when I once owned one. I gave it up long ago to be law-abiding citizen here in Texas.

Per KSAT, “the bill specifies that anyone who committed, or commits, an offense by carrying one of these weapons prior to the law change will still be held accountable for committing a crime.” That means the fines, totaling around $4,000, or one-year jail time will still be applicable to all persons until September 1, 2019, so don’t go ordering kitty keychains for your friends in bulk just yet.

How wonderful, y’all! A self-defense keychain primarily used by women will finally be legal! God forbid we take a low-impact way to practice self-defense and personal safety. With the new law, it would be worth seeking out more robust forms of self-protection. I’ve been reading up on stun guns with LED lights, and other Kubotan keychains. They offer many self-defense weapons with LED flashlights, and even flip top style weapons alongside your standard brass knuckles. Texas legislators, for the rest of the original story that follows, thank you for hearing us out. Stay safe out there!

Disclaimer: The original post that follows was published on August 24, 2018 at 1:00 p.m. The post was updated above to reflect the new laws.

Once upon a time, I was on the hunt for a quality self-defense weapon. The self-defense tool had to be easily accessible, lightweight, and small enough to go unnoticed. When I came across the cat self-defense keychain, I thought it fit all of my needs. As a resident of Texas, however, I didn’t realize that it was something that could land me in jail for at least a year. Here’s why this is seemingly harmless keychain can land you in serious trouble.

Knuckles of any kind are illegal in Texas; brass knuckles or even a cute cat keychain. The Texas Penal Code lists this under their Weapons policies, or Chapter 46. Here’s the full text from the Texas Penal Code:

“Knuckles” means any instrument that consists of finger rings or guards made of a hard substance and that is designed, made, or adapted for the purpose of inflicting serious bodily injury or death by striking a person with a fist enclosed in the knuckles.

Those pointed cat ears self-defense keychains are included in this definition as they are indeed adapted for the purpose of inflicting serious bodily injury or death by striking a person with a fist enclosed in the knuckles. And since that cute kitty keychain slides seamlessly over your index and middle fingers to rest on your knuckles, well, there’s little room for interpretation on the law.

So how do the animal self-defense keychains work? Basically, you stick your fingers inside and poke the pressure points into whatever is attacking you. The force from your fist and the sharp edges can pierce more than skin, and if used on the eyes, can certainly poke out an eyeball. Keychains can be self-defense products, am I right?

Why jail time or the fine? The Martinez Law Firm in Houston explains the penalties for being caught with knuckles or the safety keychains in question.

“…the government writes that it is an offense to knowingly and intentionally possess manufacture, transport or repair knuckles. This is typically regarded as a felony offense of the third degree. In some cases, the charge can be reduced to a Class A misdemeanor.”

A Class A misdemeanor can fetch you up to 1 year in jail, a fine of $4,000, or both. Why isn’t this information about keychain weapons more well-known? Fox7 Austin actually covered this story earlier this summer when the controversy began. Esmi Careaga discovered that the Travis County Sheriff’s Office in downtown Austin was confiscating these keychains by what sounds like the bundles every single day.

Travis County Captain Craig Smith told Fox7 that the self-defense keychains are mostly purchased by women as a way of protecting themselves in the event of an attack at night while in a parking lot perhaps. He continued,

“They’re buying it to take care of themselves in the event that they are attacked. It just blends into the keychain when you take a look closer it’s a novelty item it looks like a cat. I saw some are cats some are dogs and even a pig…

“They’re pretty sharp it’s a hard plastic I saw some that are actually made out of metal and it’s not going to bend it’s not going to give. It’s going to just penetrate the skin the eyes or where ever else. Once you got it in your hands now there’s a lot of force behind it that can inflict injury.”

The controversy, then, begins with Texas’ fairly lax weapons laws compared to other states, particularly in the case of open carry and firearm ownership. This comparison, though, falls flat when you consider the detailed and intricate process one must go through to obtain a concealed carry license and even purchase a firearm.

Another compliance issue at hand deals with the way the keychains are distributed. Because the keychains are sold online (hello free shipping), stores aren’t required to confirm the shipping location against that state’s knuckles law. That’s on the consumer to check.

While there are no calls to reform the law, South Carolina’s solution to the brass knuckle debate could be worth emulating. The state allows the ownership of brass knuckles and knuckle-like items, but they are only illegal if they’re used with the intention of committing a crime. This wouldn’t be a terrible amendment to Texas’ current law, but Texas isn’t the only state that strictly outlaws knuckles. Here’s the full list of states that have an outright ban:

Other states have amended bans, similar to South Carolina. Some only ban metal or stainless steel knuckles, or use age restrictions, per Reference. Proponents of brass knuckles, though, believe that they should be legal under the right of self-defense.

Because these plastic self-defense keychains are new to the weapons scene, keep in mind that the law hasn’t quite caught up to them, though it’s doubtful that states will amend their laws to allow for the ownership of the plastic keychains.

So before you go Googling the best self-defense keychains, research your state’s knuckles laws. Sure an expandable baton, a folding knife, a tactical pen, and keychain pepper spray might be legal, but that self-defense spike keychain might not be.

If you’re looking for a great gift for your loved ones in the realm of self-defense and personal protection, just skip the headache of these (and martial arts classes!), even though they would make quality glass breakers in a pinch. Go for pepper spray keychains, personal alarm keychains, or mace. Survival pocket knives, for the win! Better home security anyways, in the end, especially if you can attach it to a lanyard

Editor’s Note: This post was updated on March 17, 2019, to inform the reader that Self-Defense Keychains was made legal in Texas starting September 1, 2019.