A British model is facing heavy criticism after taking a selfie at a Berlin Holocaust memorial, later defending her actions on social media. Rhian Sugden posted the selfie on Monday, December 3, along with the caption “ET phone home,” a reference to the Steven Spielberg blockbuster film.

People were outraged at the model, commenting on her lack of respect for the victims and those who suffered and continue to suffer to this day. Several user comments read, “Your caption is inappropriate considering your setting” and “Silly pouting/duck faces at a Holocaust memorial? Narcissist.”

Sugden seemed to shrug off the comments, responding to the critics by saying “Every other single person who has been there has [taken] a pic/selfie. Am I smiling? Am I laughing? No.” After reportedly receiving several death threats and criticism, she took the caption off the photo but kept the hashtags: #sightseeing #museum and #Berlin.

She immediately made her Instagram private, tweeting a screenshot explaining her actions. She admitted she didn’t intend to offend anyone by her posts, and wouldn’t classify her photo as a “sexy selfie” rather just a photo with a normal background.

The model stated she was “gutted” people were saying she was disrespectful, and for her to be picked on was “unfair”. She then later tweeted out a photo that appears to be from her Instagram story, with a statement reading,

“Had lots of messages, many from Jewish people, who have gone out of their way to let me know that they are in no way offended by my selfie in Berlin,” the statement reads. “I think for people to rip me to pieces like they have you are the ones that should be ashamed of yourselves. I meant no harm or malice. Glad most of you can see that.”

The memorial, known as The Memorial to the Murdered Jews of Europe, was first opened in 2005 and consists of 2,711 rectangular concrete blocks arranged in a grid formation, leading some to interpret the monument to be a graveyard. It is located on Cora-Berliner in Berlin, a city with one of the largest Jewish population in Europe before the Second World War. 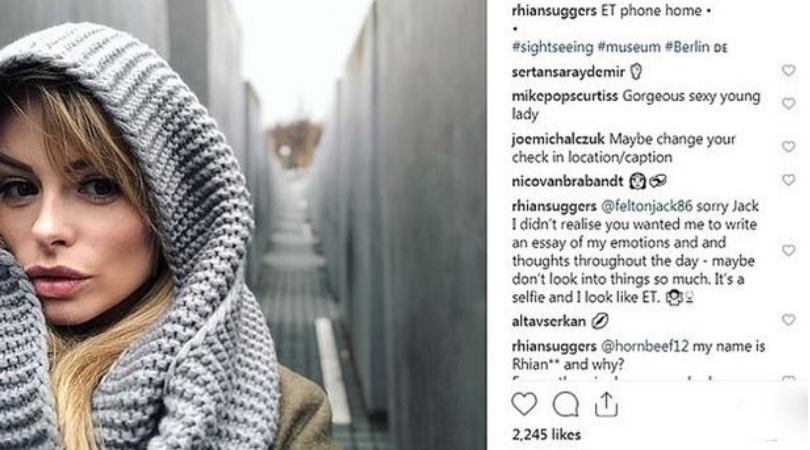