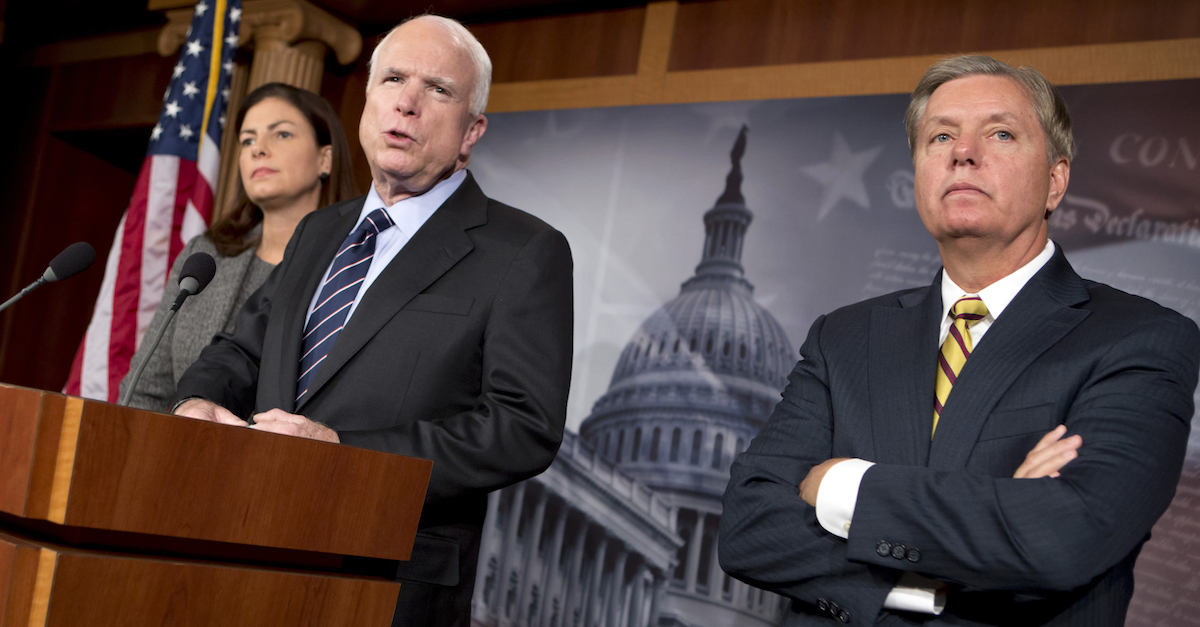 AP Photo/J. Scott Applewhite
Sen. John McCain, R-Ariz., ranking Republican on the Senate Armed Services Committee, center, accompanied by fellow committee members, Sen. Kelly Ayotte, R-N.H., left, and Sen. Lindsey Graham, R-S.C., speaks during a news conference on Capitol Hill in Washington, Wednesday, Nov. 14, 2012, where he said he would do all he could to block the nomination of United Nations Ambassador Susan Rice to replace Secretary of State Hillary Rodham Clinton because of comments she made after the deadly Sept. 11 attack on the U.S. consulate in Benghazi. (AP Photo/J. Scott Applewhite)

?I cannot in good conscience vote for the Graham-Cassidy proposal,? McCain said in a statement announcing his opposition to the party’s latest attempt to legislate the death of the Affordable Care Act. ?I believe we could do better working together, Republicans and Democrats, and have not yet really tried. Nor could I support it without knowing how much it will cost, how it will affect insurance premiums, and how many people will be helped or hurt by it.?

I cannot in good conscience vote for Graham-Cassidy. A bill impacting so many lives deserves a bipartisan approach. https://t.co/2sDjhw6Era pic.twitter.com/30OWezQpLg

McCain killed the previous repeal effort in July with a dramatic thumbs down.

Republicans had been hopeful that party loyalty and McCain’s close friendship with one of the bill’s authors, Sen. Lindsey Graham of South Carolina, would be enough to win him over, the New York Times reports. McCain said he took no pleasure in opposing the legislation. “The bill?s authors are my dear friends, and I think the world of them. I know they are acting consistently with their beliefs and sense of what is best for the country. So am I,” he wrote.

The GOP had pinned its hopes on the party?s slim majority to approve the bill — 50 votes plus the go-ahead from Vice President Mike Pence. Already lost was Kentucky’s Sen. Rand Paul, who said he opposed the bill earlier in the week, and Maine’s Sen. Susan Collins, who said she was “leaning against” it earlier on Friday. Several other key senators, including Alaska’s Sen. Lisa Murkowski, remain on the fence. Senate Majority Leader Mitch McConnell of Kentucky planned to hold a vote on the Obamacare repeal bill next week, but McCain’s announcement throws those plans in doubt, reports The Hill.