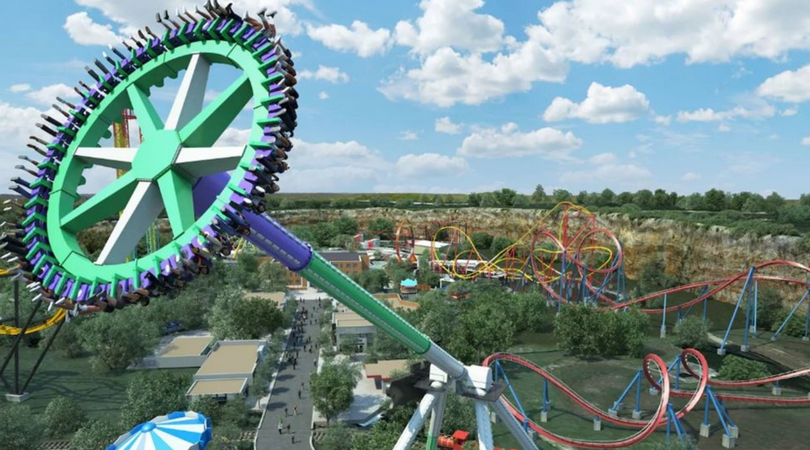 Great news for all you roller coaster fans in Texas! It is official, Six Flags Fiesta Texas in San Antonio has added a new villain to the rollercoaster family! A record-breaking, 17-story pendulum ride (aka the fastest ride in the history of Six Flags Fiesta Texas) will be available for the public in summer 2019. Six Flags announced ‘The Joker Wild Card ‘will be one the world’s tallest pendulum rides with a giant disk shipping back and forth at 75-miles-per-hour, swung 172 feet into the air! I don’t know about you, but I am already dizzy!

The green, purple and white ride will carry a total of 40 people at a time and is inspired by no other than fan favorite DC supervillain, The Joker. The ride is the fasted ride in park history and is the perfect villainous twist to the parks line up. The company is partnered with Warner Bros. Consumer Products on behalf of DC Entertainment and is slowly but surely creating a DC Universe of its own.

The park is no stranger to new additions after it has added several rides featuring specific DC characters such as Wonder Woman (Wonder Woman Golden Lasso Coaster), Thunder Rapids (rocket blast water coaster), Batman (Batman: The Ride, a 4D roller coaster, and Superman (Superman: Krypton Coaster). ‘The Wild Card’ isn?t the first Joker-themed attraction in San Antonio. ‘The Joker’s Revenge’, a backward running roller coaster, ran for a total of five years before closing in 2001 and was moved to Six Flags New Orleans in 2002.

To please its customers, Six Flags will begin to operate the park on weekends and holidays in January and February. What’s even better than that? Well, the start of the 2019 Season Pass sale is here with its special Flash Sale through Labor Day Weekend which features the best deal of the year saving up to 70 percent off. August 20 through September 3, 2018, guests will be able to review a free upgrade to a Gold Combo Season Pass with every Pass Purchase. These include admission to Six Flags Fiesta Texas, other Six Flags theme parks, and free parking with special admission offers for friends! So go, go, go!