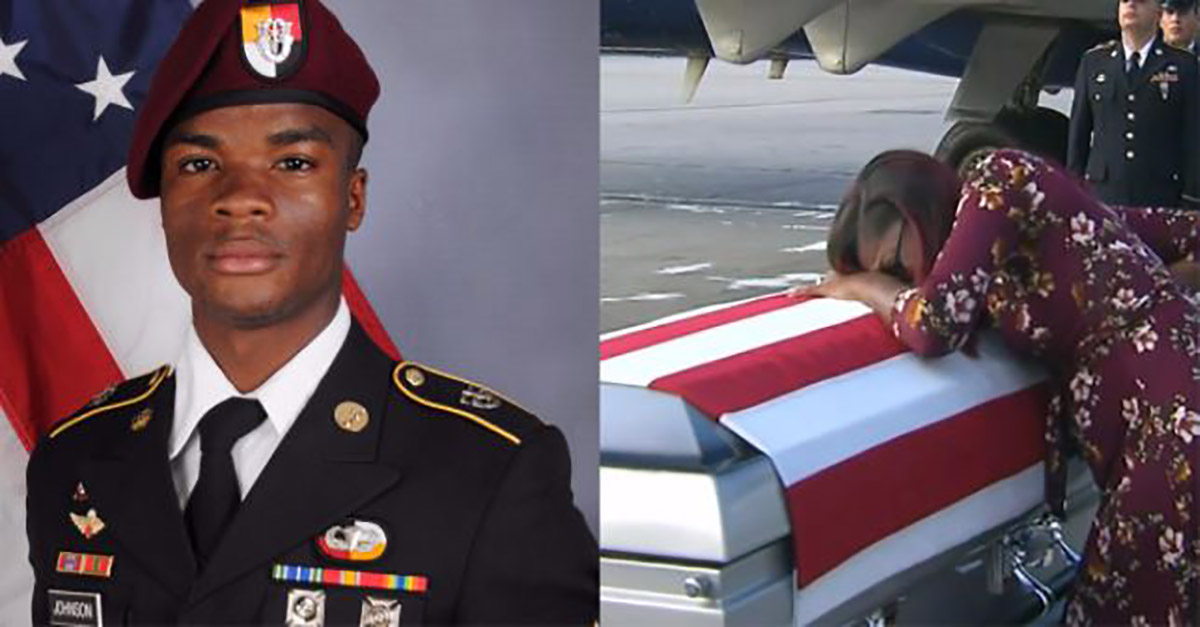 Mourners Saturday remembered not only a U.S. soldier whose combat death in Africa led to a political fight between President Donald Trump and a Florida congresswoman but his three comrades who died with him.

Some of the 1,200 mourners exiting the church after the service said the portrait of Sgt. La David Johnson, 25, was joined on stage by photographs of his slain comrades. The four died Oct. 4 in Niger when they were attacked by militants tied to the Islamic State. Johnson?s family asked reporters to remain outside for the service.

?We have to remember that one thing: that it wasn?t just one soldier who lost his life,? said Berchel Davis, a retired police officer who has six children in the military. He said the preacher and Rep. Frederica Wilson both made that a part of their talks. ?That was a good gesture on everyone?s part.?

He and others said the fight between Trump and Wilson was never mentioned during the service.

La David Johnson?s pregnant widow, Myeshia, held the arm of an Army officer as she led her two young children and her family, dressed in white, into the Christ the Rock Community Church in suburban Fort Lauderdale. The modern hymn ?I?m Yours? could be heard coming from inside.

Johnson?s sister, Angela Ghent, said after the service that ?it don?t feel real? that her brother was killed.

?It hasn?t hit me yet, I haven?t had time to grieve,? said Ghent, who last spoke to her brother a few weeks before he died. She said she was glad mourners got to hear about her brother?s love for bikes and cars, not just his military service.

The fight between Trump and Wilson had taken the focus off Johnson, whose widow is due to have a daughter in January. Sgt. Johnson told friends she will be named La?Shee. The couple, who were high school sweethearts, already had a 6-year-old daughter, Ah?Leeysa, and 2-year-old son, La David Jr. An online fundraiser has raised more than $600,000 to pay for the children?s education.

Johnson?s mother died when he was 5; he was raised by his aunt. His family enrolled him in 5000 Role Models, a project Wilson began in 1993 when she was an educator where African-American boys are paired with mentors who prepare them for college, vocational school or the military.

?We teach them to be a good man, a good husband and a good father. Sgt. Johnson typified all of those characteristics,? said mourner Carlton Crawl, a public school consultant who is one of the program?s mentors.

In 2013, a year before he enlisted, Johnson was featured in a local television newscast for his ability to do bicycle tricks, earning the nickname ?Wheelie King.? He said he learned his tricks by going slow.

?Once you feel comfortable, you could just ride all day,? he told the interviewer.

RELATED: President Trump calls widow of fallen soldier, tells her he knew ?what he signed up for?

The war of words between the president and Wilson began Tuesday when the Miami-area Democrat said Trump told Myeshia Johnson in a phone call that her husband ?knew what he signed up for? and didn?t appear to know his name, an account later backed up by Johnson?s aunt. Wilson was riding with Johnson?s family to meet the body and heard the call on speakerphone. She was principal of a school Johnson?s father attended.

Trump tweeted that Wilson ?fabricated? his statement, and the fight escalated through the week. Trump in other tweets called her ?wacky? and accused her of ?SECRETLY? listening to the phone call.

Trump?s chief of staff, John Kelly, entered the fray Thursday. The retired Marine general asserted that the congresswoman had delivered a 2015 speech at an FBI field office dedication in which she ?talked about how she was instrumental in getting the funding for that building,? rather than keeping the focus on the fallen agents for which it was named. Video of the speech contradicted his recollection.

Wilson, who is black, fired back Friday when she told The New York Times: ?The White House itself is full white supremacists.?

RELATED: On Memorial Day we remember our fallen soldiers, but shouldn?t we do more to remember them every day?

The retorts persisted Saturday morning, with Trump tweeting: ?I hope the Fake News Media keeps talking about Wacky Congresswoman Wilson in that she, as a representative, is killing the Democrat Party!?