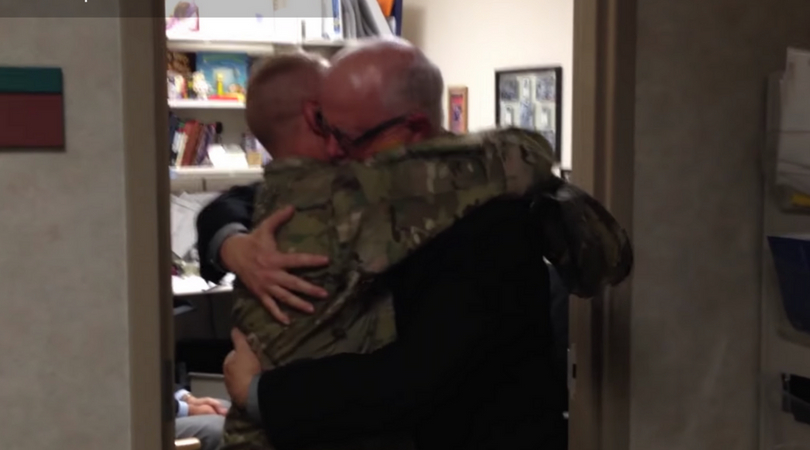 Get ready to get the tissues out, because this one is a real tear-jerker! A soldier decided to pull off the surprise of a lifetime, by surprising his family with his presence after being away overseas. Mason Miller had been on the Afghanistan combat tour and mobilization/ demobilization for the past year, which is why he attempted to surprise his father, mother, and sister, coordinating with one of his friends so he could record their reaction. He only told his friends he would be returning home early from deployment, weeks earlier than expected.

Mason first showed up at his dad?s office, creeping around the corner of the building and asking the receptionist to keep her voice down. He asked for his father’s location, in which they encouraged him to knock on the door to surprise him after he was in a meeting. In the video you can hear Mason?s father?s voice, asking who is ?disrupting? them, without opening the door. A few seconds later, Mason knocks again much louder, and his father is seen opening the door and is immediately utterly dumbfounded. The father is shocked to see his son and cried out his name before breaking down into tears and embracing him for a tight hug. It’s safe to say all co-workers were emotional and began clapping and cheering after witnessing the caring embrace.

Now, if you think that?s a tear-jerking video, there’s more. The soldier surprises his sister at work with the help of his father. As soon as Mason is seen entering the workspace, his sister gasps and immediately walks over to the door to open it and breaks down into tears. The two are seen embracing each other for what seems like a lifetime, and keeps asking questions to make sure “he’s really there.” You can see the love in her face, saying ?I can?t believe you?re home”.

And if that didn?t make you cry (are you heartless or something?) there is another video where the American Hero, surprises his mother, who works at a school library. Mason storms inside the library and automatically goes to his mother and hugs her, as she yells out his name. The mother in awe embraces her son tightly and begins to show him off to her elementary school students, saying, ?This is my son, I haven’t seen him in 10 months.? You can see the excitement on the student’s faces, and hear them shout, ?Hi Mason!? Check out the videos below!

After he got back to his house, his friend, who was the one recording all of the videos and was the one who coordinated the big surprise homecoming, stated Mason drank some Guinness and went to In-and-Out Burger. Honestly, that sounds like a great day to be coming home. I always find these videos so heartwarming, there’s a sense of relief about seeing your loved ones back home, after fighting for his country and giving it everything he has to protect his home. It’s safe to say these memories will last a lifetime. Thank you for your service Mason, we appreciate you and welcome home!

Editor’s note: This article was originally published on August 31, 2018.

Watch: Marine Kidnapped as Newborn Meets FBI Agent Who Rescued Him Over 2 Decades Ago