Someone thought they had an easy mark. A Chad, a Brad, a Tad, and a Thad standing at a gas station clad standard frat boy attire. Four seemingly easily scared white boys with enough money in their lives that they’d happily part with some so as not to spend their final moments bleeding out on the filthy concrete of a Florida gas station.

That did not turn out to be the case. The four young men who found themselves on the mean end of a Florida man’s gun decided that, no, dammit, you cannot have our margarita money. This was their spring break, and if anyone was going to be committing crimes it was going to be them. So the four guys fought back. And won. It was all caught on surveillance video.

The four guys, from Indiana, were lucky. They were dealing with an objectively terrible criminal here. The would-be robber had a gun and still walked right up to the four spring breakers. Close enough that they could reach out and grab him. Which they almost immediately did. It’s a gun, buddy. It’ll work from a distance. The whole point of it is to use it from a distance. If people wanted to keep hurting each other up close we’d have skipped guns and just gone on making progressively more badass swords. We might’ve even gotten to light sabers by now. But at some point people were like, “You know, it’d be adventageous for us if we could hurt our enemies from a distance and, thus, lower the liklihood of getting hurt ourselves.”

How this robber didn’t stand five feet away and say, “Toss me your wallets or I’ll spray your brains and every Post Malone lyric contained within all over your mom’s Volvo” is baffling.

Instead these four dudes kicked the guy’s ass and took his gun. Then the world’s worst mugger’s shirtless friend came out and tried to help him escape while the white boys pointed the gun at them and talked shit. All in all a pretty terrible attempt at robbing people.

Unfortunately the man who attempted to rob the spring breakers has yet to be apprehended, but his shirtless friend has been arrested so, hopefully, it’s only a matter of time.

Watch: There’s Nothing More Texas Than This Whataburger Gun 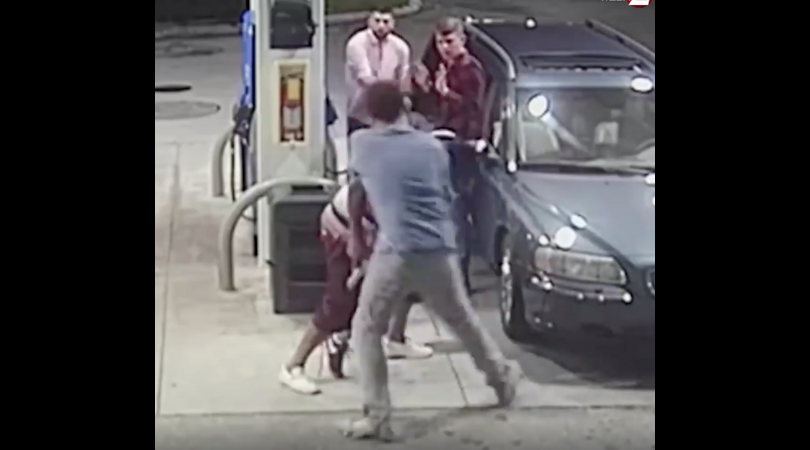