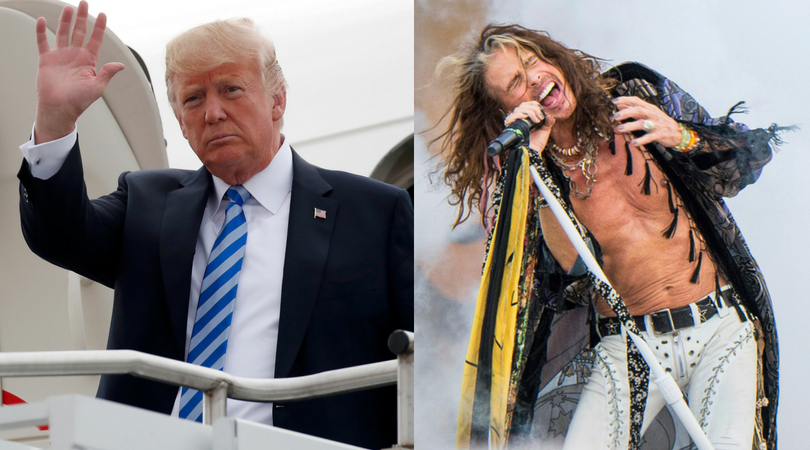 President Trump is at it again with the rally’s, and this time, things turned sour real quick. The President held a rally in Charleston West Virginia, where during the event he decided to play Aerosmith’s hit song “Living” On The Edge” over the PA. As it turns out, the President didn?t have permission to use the song, and Aerosmith frontman, Steven Tyler, is now taking legal action.

Yes, the famous singer and songwriter wants all songs deleted from the playing at any Trump rally.

The scene in WV before Trump’s rally. Aerosmith’s “Livin’ on the edge” playing. pic.twitter.com/HW1qr9TBgE

Tyler’s attorney sent a cease-and-desist letter to the White House due to not having the ?proper permission? to use the band’s music. Attorney Dina LaPolt stated this isn’t the first time President Trump used an Aerosmith song, which makes the violation even more egregious. Trump’s use of Aerosmith music was previously shut down two times during his presidential campaign in 2015 receiving two cease-and-desist notices.

Tyler objected the use of ?Dream On? at a Trump campaign, where Broadcast Music, Inc. (BMI) pulled the public performance right for ?Dream On? after Tyler?s letters in 2015, regarding Trump’s use of the song. Trump responded to the allegations back then through Twitter.

Even though I have the legal right to use Steven Tyler’s song, he asked me not to. Have better one to take its place!

Steven Tyler got more publicity on his song request than he’s gotten in ten years. Good for him!

This time around, the note cited the Lanham Act, which prohibits any false designation or misleading description or representation of fact, ?likely to cause confusion as to the affiliation, connection or association of such person with another person.? Tyler is a registered Republican and attended the first GOP debate back in August 2015, but LaPolta explained how Tyler problem with Trump’s? use of the music goes beyond politics. According to the musician, it all has to do with copyright control and intellectual property. One must get permission from the music creators.

Tyler is not suing for monetary damages, rather just want the President to steer clear of any Aerosmith songs. The White House has yet to respond, but the letter did call for a confirmation of complaint in letter form within twenty-four hours of receiving the cease and desist.