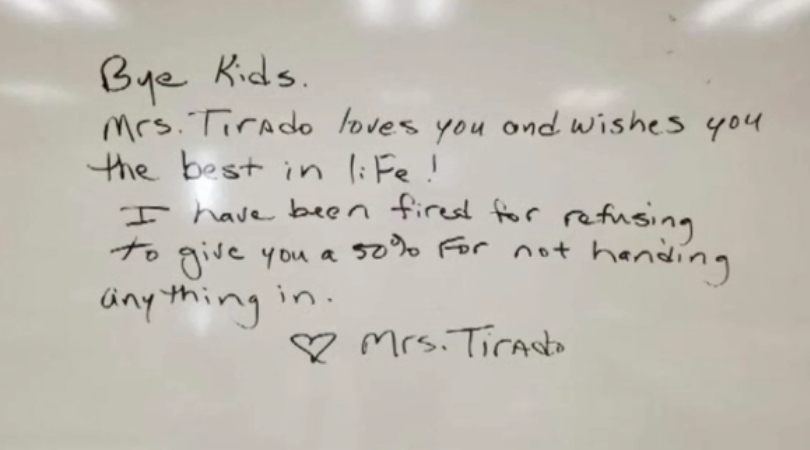 A teacher from Port St. Lucie, Florida, made headlines, after being fired for refusing to give students a 50-percent grade on homework that was not turned in. Diane Tirado has been in the education field for more than 10 years and began working at West Gate School in August 2018 as an eighth grade U.S. History teacher. Tirado assigned an explorer notebook project, giving students two weeks to complete it. When several students didn’t turn in the assignment, Tirado learned about what she calls a “No Zero” policy, written in the West Gate students and a parent handbook.

The grading rubric states “No zero’s- lowest possible grade is 50%”. When asked what she should do if they don’t turn it in an assignment, the administration told Tirado to give students the 50 percent, no matter the situation. Refusing to give students a grade for something they didn’t turn it, the South Florida teacher was terminated on September 14th.

Before packing her classroom, Tirado decided to write a message to her students on the whiteboard, sent out a picture through a class app and posted her story on Facebook. Several parents and students supported her anti-no-zero policy, applauding the teacher for standing her ground.

Westgate Chief Information officer, Kelly Padrick, stated Tirado was an employed as a teacher for St. Lucie Public School from July 30, 2018, to September 14, 2018. She was contracted on probation status and terminated shortly after, but school faculty since has discussed the range of points for any work submitted in each grading category. He continues,

“There is no district or individual school policy prohibiting teachers from recording a grade of zero for work not turned in. The district’s Uniform Grading System utilizes letter grades A-F, numerical grades 100-0 and grade point averages from 4-0.”

The scale uses a 10-point range for each letter grade. A zero is noted on the scale for work not attempted or work that’s incomplete. Yet, Tirado said she was instructed to never give a student a zero, as the handbook stated, and hopes the school can change or motivate policy change.

Editor’s note: This article was originally published on February 7, 2019.