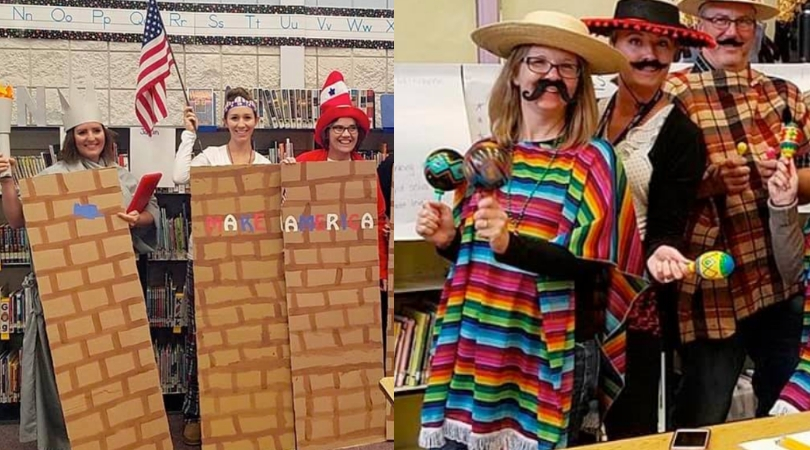 The Middleton, Idaho school was quickly met with outrage from locals, drawing coverage in national news media outlets with harsh social media responses. Several users called the action ?insensitive and inappropriate?, causing the American Civil Liberties Union to send a letter to the district. ACLU expressed their concern saying the school district and staff have a responsibility under federal and state law to prevent and protect students and staff from bullying, discrimination, harassment, and intimidation.

Supporting the teachers, an online petition has drawn more than 10,000 signatures suggesting the issue was ?blown out of proportion?. The petition states the ?team-building? exercise was done after school where no students were present or involved. The plea reads, “We fully believe in our staff at Middleton Heights and don’t feel that this should cost the men and women involved their jobs and cause further stress to our children.”

A competing petition was also created, gaining the same amount of signatures, entitled ?No racism in Middleton School District?. Describing the costumes as bigoted, racist, and disturbing, the petition demands change in school culture through a curriculum that provides awareness of ?systemic racism.?

The petition reads, “The gross display of dehumanization of Latinx children and the outrageous harm caused by trusted adults that they learn from and look up to cannot be ignored and swept under the rug with a simple apology.? Parents are asking administration and teachers for more than just an apology to repair the harm caused to students and the community of Ohio.

The worst part of this whole scenario? The wall reads ?Make America Great Again?, while staff who are dressed up as a Mexicans are seen wearing ponchos, sombreros and are holding maracas. One woman?s sombrero even has the words ?MEXICAN? in big bold red letters on the top. The post read, ?It was a great day to be a Heights Hawk! We celebrated our RESPECT character winners, single and double marathon runners.?

Another day, another racist costume. This is from Middletown School District in Idaho. Please call (208) 585-3027 to say
1) racism is unacceptable
2) they are creating and promoting a hostile learning environment to children
3) what is their plan to make it right? pic.twitter.com/DqUwvP3ROL

Although the photos have been deleted by Facebook, users managed to screenshot the racist Halloween costumes (because let’s face it…that’s exactly what they are), posted them back up, and are now circulating across social media. Many parents and members from the district and online users are furious with the costumes and the school administrators saying they lack moral judgment and compassion.

?These photos are extremely disheartening,? Almanza wrote. ?ALL children should have the right to a learning environment that celebrates all backgrounds. Imagine how some of the students felt when they walked into their classrooms on Halloween and saw their teachers (people they look up to) dressed like this? This is NOT funny. This is heartbreaking. Students deserve better.?

Dr. Josh Middleton, the School District?s superintendent, addressed the controversial costumes in a live Facebook video, where he says he only became of aware of the situation when a parent contacted him a few days after and is now offering his ?sincerest and deepest apologies?. He believes the decision was a poor judgment involved, but there was no ?malicious intent? behind it.

Middleton added the school district is investigating the issue, but it is unclear in any staff member in the photo will face upon termination. I don’t know about you, but I can’t wait for POTUS’s tweet about this. Who even thought about these costumes and in their right mind believed it was a good idea? It’s called common sense, folks. Common sense.