Texas will allow more teachers to have guns in school and will increase mental health services for students under bills that Gov. Greg Abbott signed into law Thursday as major parts of the state’s response to a 2018 mass shooting at a high school near Houston.

School districts will be allowed to place as many armed teachers or school personnel on campus as they see fit. The new laws also are designed to put more mental health counselors on campus, train teachers to recognize mental health problems and create “threat assessment teams” to help identify potentially dangerous students.

“We are proud to have responded to one of the most horrific days in the state of Texas,” the Republican governor said of the shooting at Santa Fe High School in which eight students and two teachers were killed. “We can never erase the pain that this tragedy caused, but we can act to make our schools safer.”

Abbott called school safety one of his top priorities this year, but he and the Republican-majority Legislature made no move to restrict the sale or possession of guns in a state with more than 1.3 million handgun license holders.

Efforts to create so-called “red flag” laws to keep guns away from people deemed dangerous to themselves or others, and to toughen penalties for negligent home storage were defeated. Addressing mental health and a push to arm more school personnel quickly became the focus for lawmakers.

A push for red flag laws, “Right now it’s not necessary in the state of Texas,” Abbott said. “We think the best approach is what we passed.”

Gun rights advocates say the added marshals will save lives. But teachers groups, gun control activists and some parents worry that more guns on campus could lead to lethal accidents. Critics have also suggested that it could lead to more violence against black students because of inherent biases.

The Texas State Teachers Association lauded the boost in mental health services and training but opposed expanding the marshal program.

“Teachers are trained to teach and to nurture, not double up as security guards,” union spokesman Clay Robison said.

It is unclear how many school marshals — the term used to describe school workers who go through “school marshal” training — will be added by next school year. The program is voluntary and marshals must be approved by their local school districts for the 80 hours of training, which includes “active shooter” scenarios. The governor’s office did not immediately provide an estimate for how many it expects will be certified for the 2019-2020 school year.

Texas had less than 40 school marshals throughout its more than 1,000 public school districts in early 2018. Applications rose sharply after the Santa Fe attack, which authorities blame on a student at the school who faces charges, and the number of school marshals rose to nearly 200 by the end of the school year that just ended.

Previous law limited the number of school marshals to one per 200 students or one per building and the new law removes that cap. Marshals will still have to keep their guns locked away from students. A separate effort to allow marshals to carry concealed weapons on them in school didn’t pass.

Rusty Norman, president of the Santa Fe school board, said his district is still undecided on whether to put armed school marshals on campus.

“After the community suffered the tragedy we suffered, people are willing to look at all aspects of safety, and that’s just one additional thing that does make people safer,” Norman said. “Others are worried about introducing more guns on a school campus.” 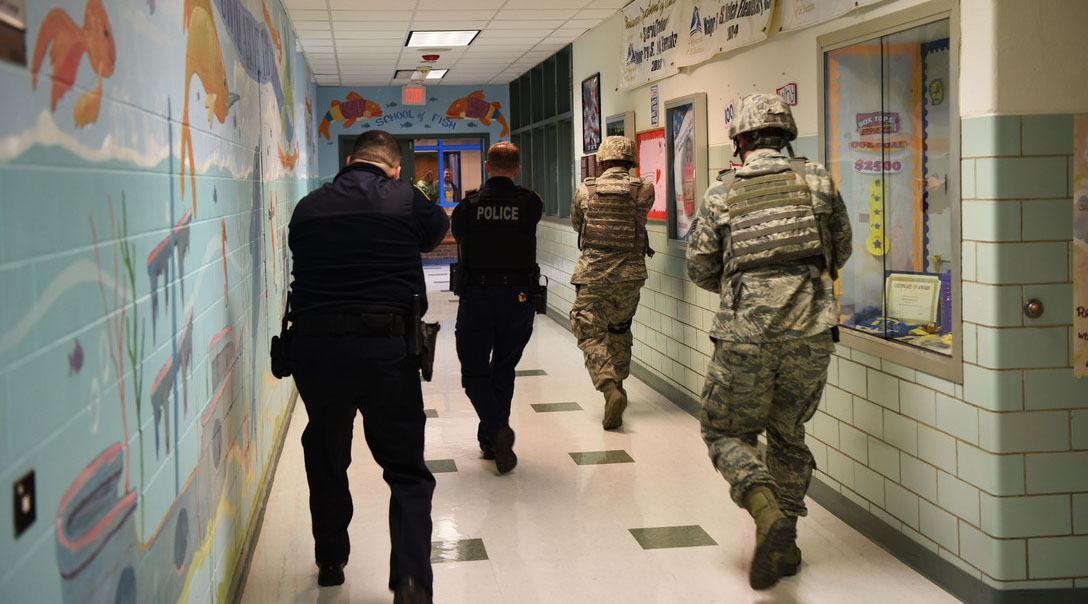