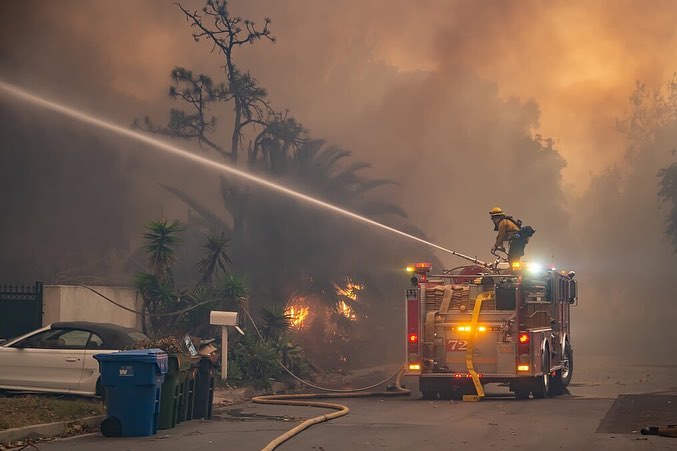 With California battling raging wildfires across the state, the governor of Texas announced he will be deploying firefighters all around Texas to aid California fire officials. Governor Greg Abbott’s office stated they will be sending approximately 200 firefighters and support personnel with 55 fire engines from local fire departments, along with a team from the Texas Forest Service at Texas A&M.

Abbot stated it was imperative that the call for help was answered, especially when a disaster as big as this one strikes. The men and women are expected to be gone for at least 14 days but could stay longer if needed, and are expected to arrive in California in two days.

Eleven fire departments leaving from Katy are going to the Woolsey Fire in southern California, where they will be protecting structures and homes from the fire. The flames have already destroyed more than 91,000 acres. Texas firefighters will be taking fire trucks designed to fight wildfires along with regular fire trucks designed to battle house fires.

It’s official. #LTfirefighter Battalion Chief Carlson, Lt. McAnally, and Lt. Griggs will be deploying with nearly 200 other Texas firefighters to California tomorrow at 1300.

Safe travels and safe work on the fireground and in the air to all the firefighters assigned. pic.twitter.com/Va2lfYx3nz

This has been the most destructive wildfire in California’s history, continuing to burn through Sunday night with fires spreading throughout the state. There have been 31 deaths and more than 200 people unaccounted for at Camp and Woolsey fires. Unfortunately, authorities are expecting that number to rise as officials search the charred remains. The Camp fire has consumed nearly 109,000 acres, while Woolsey and Hill fired have burned 83,000 and 4,530 acres.

If you are currently in a risk-area in California, authorities are asking you to follow the guide to wildfire safety and pay attention to local authorities. Blazes spark faster than one might so, making it crucial that residents in harm’s way prepare for possible evacuation.

The following Texas fire departments will be heading to California provided by Abbott’s office: