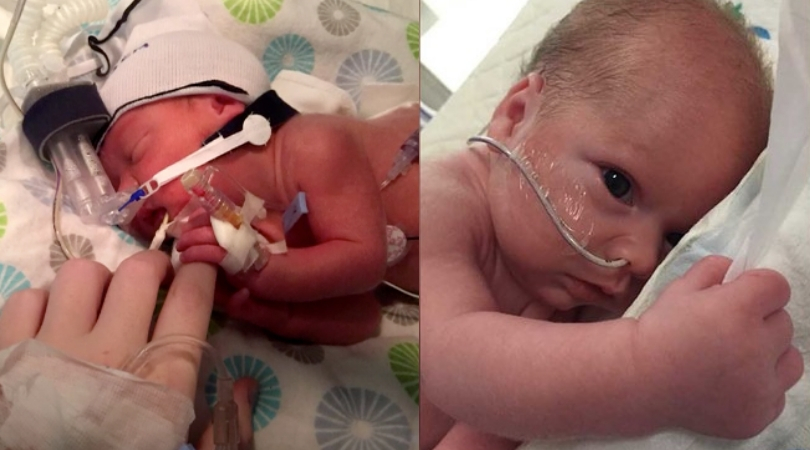 It was a great day for a North Texas family after doctors at the Fetal Care Center at Medical City Children’s Hospital were able to perform a successful ?open fetal surgery? on an unborn baby inside his mother?s womb. This was the first procedure of its kind in North Texas.

At 18 weeks pregnant, Sarah Prowell and boyfriend Sean Kirby learned their son suffered from Spina Bifida, a birth defect that prevents the spinal cord from property forming. In babies, Spina Bifida can lead to paralysis and differing levels of disability including lifelong bladder issues. A portion of the neural tube can fail to develop as well, causing defects in the bones.

Medical experts advised the parents their son, Uriah, was a perfect candidate for the first of its kind procedure in Dallas, Texas. A team of doctors believed they could save their son’s life to prevent ongoing injury to his organs that could severely compromise them in the future.

Due to the risk of the procedure, medical experts needed the mother’s permission, since the surgery would not only put the risk on Uriah but the mother as well. Although the surgery is not a cure, studies show the repair can lead to better results than traditional repair surgery for a child who is already born. The surgery greatly reduces the need to divert fluid from the brain, improves mobility and improves the chances that a child will be able to walk independently.

Prior to Uriah?s surgery, experts stated several families whose babies were diagnosed with the most common form of severe spina bifida, known as myelomeningocele, had to travel elsewhere for open fetal surgery. Knowing that it won?t eliminate the defect, rather repair the damage before it became irreparable, the mother took a risk and agreed to the procedure.

After hours in the operating room, Baby Uriah had become the first North Texas patient to receive the surgery on June 25, 2018. Uriah was born premature and had to remain in the hospital for monitoring. Two weeks ago, the newborn was released and is currently kicking his legs, which is an early sign of success from leading-edge surgery for Spina Bifida.

Prowell is grateful for the support she received from medical staff, and for taking care of her son, stating, “I think the most emotional part of this whole process was sitting in the hospital waiting for him to come home that was really hard on me. Now, I’m just happy that he is here.”