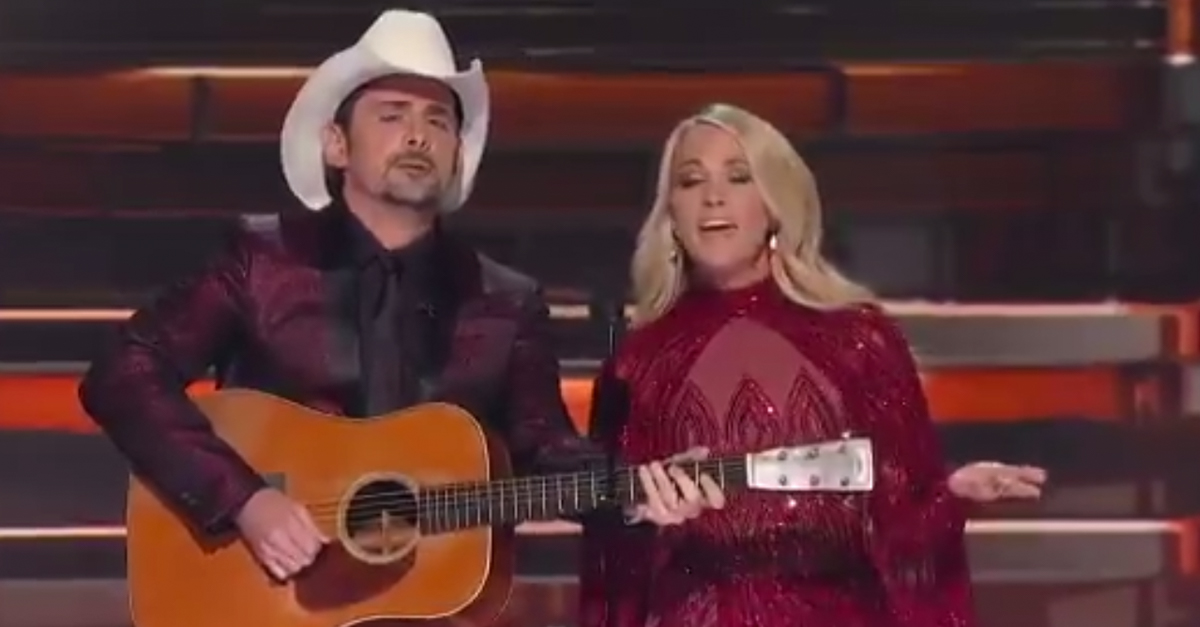 Just as they did in November 2016, Brad Paisley and Carrie Underwood opened the annual Country Music Awards with a few good-natured jokes about politics. The country singers turned yearly CMA hosts poked fun at President Donald Trump during a brief musical parody of Underwood’s own “Before He Cheats.”

.@BradPaisley & @CarrieUnderwood's host opening gave us ALL the feels! #CMAawards – it's LIVE now on @ABCNetwork! pic.twitter.com/kDHmwSdPzN

In “Before He Tweets,” the singers joke about President Trump’s penchant for tweeting.

“Right now, he’s probably in his PJs / watching cable news / reaching for his cell phone,” Paisley sang to the crowd. “In the middle of the night from the privacy of a gold-plated white toilet seat / he writing Liddle’ Bob Corker, NFL and covfefe.”

Paisley and Underwood closed out their tune with a pointed reference to Trump’s ongoing war of words with the North Korean government.

“It’s fun to watch it, that’s for sure / until little rocket man starts a nuclear war / and maybe next time he’ll think before he tweets,” they sang.

Each year, Underwood and Paisley use their monologue as a chance to recap what’s going on in the world, both inside and outside the country music scene.

In 2016, the duo made sure to joke about Trump and former Secretary of State Hillary Clinton. The 2016 edition came rife with jokes about a basket of deplorables, and a rigged election.