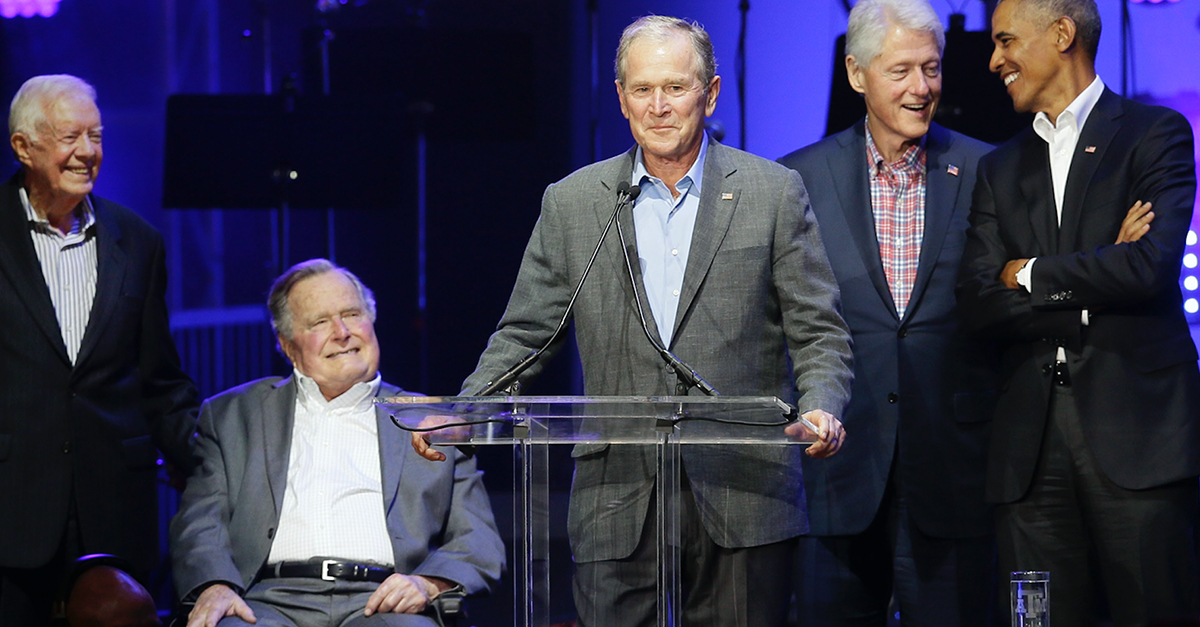 The five living former presidents put aside politics and appeared together for the first time since 2013 at a concert on Saturday to raise money for victims of devastating hurricanes in Texas, Florida, Louisiana, Puerto Rico and the U.S. Virgin Islands.

Texas A&M is home to the presidential library of the elder Bush. At 93, he has a form of Parkinson’s disease and appeared in a wheelchair at the event. His wife, Barbara, and George W. Bush’s wife, Laura, were in the audience.

The appeal backed by the ex-presidents has raised $31 million since it began on Sept. 7, said Jim McGrath, spokesman for George H.W. Bush.

President Donald Trump offered a video greeting that avoided his past criticism of the former presidents and called them “some of America’s finest public servants.”

“This wonderful effort reminds us that we truly are one nation under God, all unified by our values and devotion to one another,” Trump said in the greeting, played during the concert.

Four of the five former presidents — Obama, George W. Bush, Carter and Clinton — made brief remarks that did not mention Trump. The elder Bush did not speak but smiled and waved to the crowd. They appealed for national unity to help those hurt by the hurricanes.

“The heart of America, without regard to race or religion or political party, is greater than our problems,” said Clinton.

The last time the five were together was in 2013, when Obama was still in office, at the dedication of George W. Bush’s presidential library in Dallas.

There is precedent for former presidents joining forces for post-disaster fundraising. George H.W. Bush and Bill Clinton raised money together after the 2004 South Asia tsunami and Hurricane Katrina the next year. Clinton and George W. Bush combined to seek donations after Haiti’s 2011 earthquake.

“It’s certainly a triple, if not a home run, every time,” said Brandon Rottinghaus, a political science professor at the University of Houston. “Presidents have the most powerful and prolific fundraising base of any politician in the world. When they send out a call for help, especially on something that’s not political, they can rake in big money.”

RELATED: President Trump calls widow of fallen soldier, tells her he knew “what he signed up for”

Amid criticism that his administration was initially slow to aid ravaged Puerto Rico, Trump accused island leaders of “poor leadership” and later tweeted, “Electric and all infrastructure was disaster before hurricanes,” while saying that Federal Emergency Management Agency, first-responders and military personnel wouldn’t be able to stay there forever.

But Rottinghaus said ex-presidents are seen as less polarizing than the current president.

“They can’t get away from the politics of the moment,” he said of current White House occupants. “Ex-presidents are able to step back and be seen as the nation’s grandfather.”

Hurricane Harvey slammed into Texas and Louisiana Gulf Coast as a Category 4 hurricane on Aug. 25, unleashing historic flooding in Houston and killing more than 80 people. Shortly thereafter, all five ex-presidents appeared in a commercial for a fundraising effort known as “One America Appeal.” In it, George W. Bush says, “People are hurting down here.” His father, George H.W. Bush, then replies, “We love you, Texas.”

A website accepting donations, OneAmericaAppeal.org, was created with 100 percent of proceeds pledged to hurricane relief.