Remember When the Navy Honored Its First-Female Jet Pilot With an All-Female Flyover? 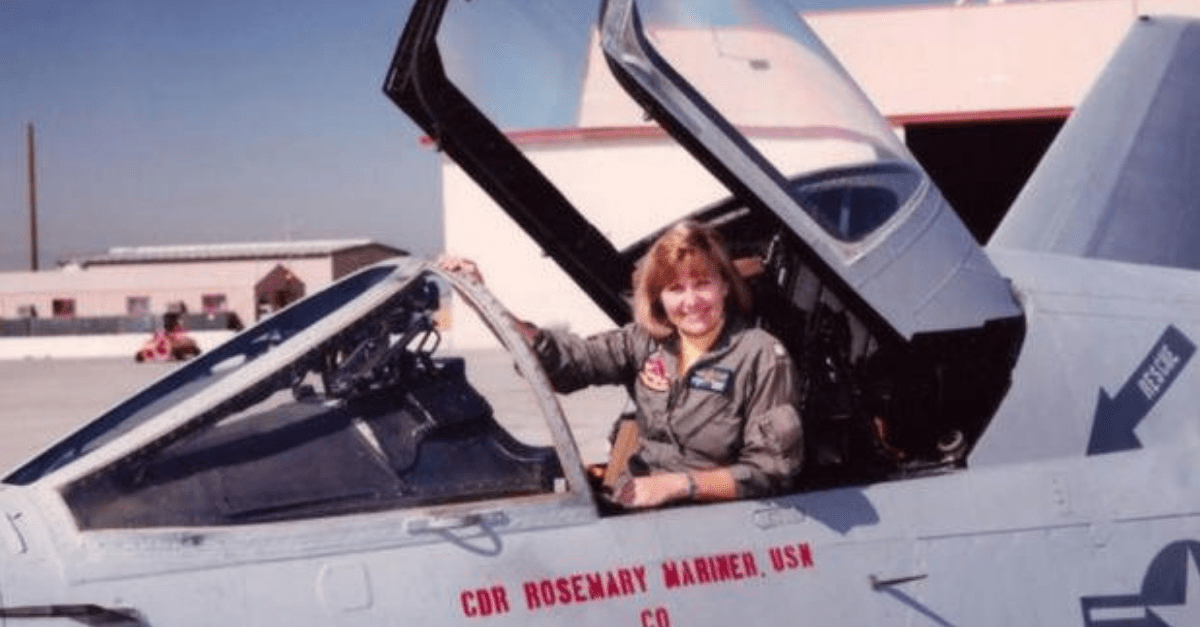 Growing up on the Chesapeake Bay across from the U.S. Naval Academy, the Navy holds a special place in my heart. While I may not have aspired to join the Navy, my love for those Dress Whites is much like music: I can’t carry a tune but I’m an educated and active supporter. You’d also be hard-pressed to find any Marylander who doesn’t love naval aviation. The Blue Angels, the U.S. Navy’s flight demonstration squadron, filled the skies every summer and proved time and time again the prowess of the Navy. Now, for the first time ever, the U.S. Navy will hold an all-female flyover to honor the life and legacy of retired Navy Captain Rosemary Mariner. She passed away on January 24, 2019 following a brave and fierce fight with ovarian cancer.

Rosemary Mariner was one of the first six women to earn wings as a United States Naval Aviator. Born in Texas, she earned her wings in 1974 in Pensacola, Florida. It wouldn’t be her only first as a Naval flight pioneer as, according to sources, she would go in 1976 to become “the first woman to fly a frontline light attack aircraft.

In 1990, Mariner became the first military woman to command an operational air squadron and was selected for major aviation shore command” during Operation Desert Storm. She would go on to command Tactical Electronic Warfare Squadron Thirty Four (VAQ-34) and after 24 years of military service, she retired in 1997 at the rank of Captain. In the photo below, she stands with an A-7E Corsair II.

What better way to pay homage to an exceptional American innovator and pioneer than by holding the first all-female flyover in honor of her groundbreaking achievements. Eight women will conduct the “Missing Man Flyover” on Saturday, February 2, 2019, in Maynardville, Tennessee. It will accompany the funeral service for retired Navy Caption Rosemary B. Mariner.

The Missing Man Flyover is unique in that, per the U.S. Navy’s Facebook post, it honors the service of aviators who died serving their country. Four aircraft fly above the funeral service in formation while one aircraft breaks away and climbs vertically into the skies.

If you’ve never experienced the exceptional silence that befalls a crowd when servicemen and women take flight overhead, it is truly a chilling experience. One that makes you exceptionally proud to be an American, and in this case, one that should make the ladies even prouder. The eight women, featured on Facebook by the Navy this morning, are from squadrons based at NAS Oceana (Naval Air Station Oceana) and will fly F/A-18E/F “Super Hornets.” Meet the female jet pilots, y’all!

There will no doubt be footage of these fighter pilots honoring the first female jet pilot in Navy history, but if you’re in the vicinity of Maynardville and the weather is mild, head on out to a park to see for yourself.

This article was originally published on January 31, 2019.

Watch: The US Air Force Lost a Bomb Where?!