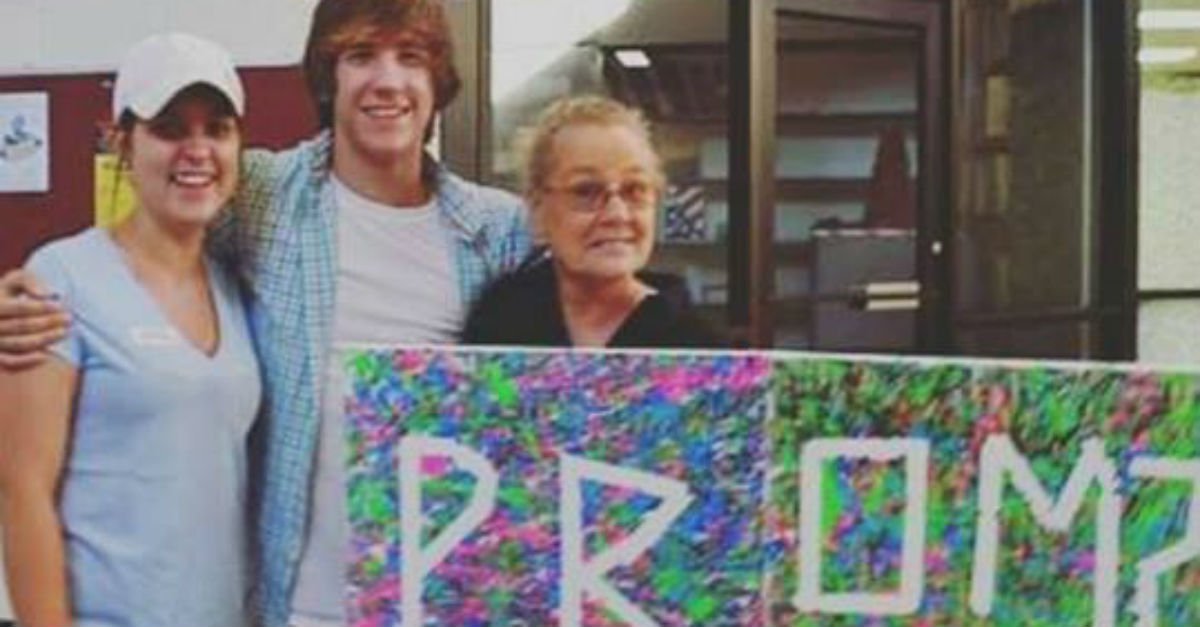 Bryce Maine, 18, celebrated his birthday by asking a very special woman to be his prom date.

The Eufaula, Ala., high school senior thought to take his grandmother to prom, as she hadn’t been to one before. “Every woman deserves to go to a prom, no matter how old you are,” he said. Eufaula High School, however, saw the matter very differently.

Despite buying already buying outfits for the dance, the school informed Maine that he would need to choose a different date.

*UPDATE* 4/3/17 At the school meeting their decision still stands… Nanny CAN NOT go to prom.*UPDATE* This has…

Catherine asserted that the school was worried students would ask their grandparents to prom as jokes, making a mockery of the institution.

RELATED: This cop forgot that his body camera was rolling and got caught with his pants down

She ended the post with #LetNannyGoToProm which has since picked up a little bit of steam on Twitter:

When many dismiss our seniors, this young person is embracing one to make her dream come true, he should be applauded. #LetNannyGoToProm

#LetNannyGoToProm come on! Look how pretty and excited she looks! She's never been to a prom! He's a sweetie for wanting to take her! pic.twitter.com/vPQ1sXEtpe

The high school released a statement, stating both safety and the student rules:

“The Junior-Senior Prom is a cherished event held in the spring of each year. Attendees must be under the age of twenty and/or should be enrolled at EHS. Non-EHS students who are planning to attend as dates must present a valid photo ID verifying their age prior to admittance. Students planning to bring a non-EHS student as a date must also inform the prom sponsor no later than two weeks prior to the event. Students who purchase tickets for dates who have not been previously approved to attend are subject to the forfeiture of the Non-Refundable prom ticket. Inappropriate attire, as deemed by the administration, which violates the decency and modesty clause of the ECS Code of Conduct will not be permitted.”

Steve Hawkins, principal of Eufaula City Schools, stated, “Safety of students and staff is the first and most important of the many tasks of a school administrator. For the 10 years I have been high school principal, we have denied requests each year from students asking to bring older dates to prom.  We do not chance leaving any stone unturned when it comes to safety. Most high schools have an age limit for prom attendees.”

The statement also combated Catherine’s Facebook post and revealed that the school was not contacted with Maine’s parents to confirm the age limits for prom dates. A meeting between Maine’s father and the administrators is set for a later date.

The pair plans on spending a night on the town should the school refuse to budge.