Some Navy Special Warfare forces who were videotaped driving through Louisville with “Trump” flags waving from their military convoy have been punished.

According to the Louisville Courier-Journal, an inquiry by the unit’s commander found that the service members “violated the spirit and intent of applicable DoD (Department of Defense) regulations concerning the flying of flags and the apparent endorsement of political activities,” according to a statement issued Tuesday by Lt. Jacqui Maxwell of the Naval Special Warfare Group 2 in Virginia Beach, Va.

RELATED: Another war may be on the horizon

Maxwell added that “administrative corrective measures” were taken with each individual based on their respective responsibility. She did not elaborate on the disciplinary measures taken.

The unit is based in Virginia Beach and was said to be training in and around Fort Knox. An unspecified number of forces were punished.

Military regulations discourage personnel from giving the impression that the Defense Department endorses any candidates and/or political causes.

The flag was spotted on a military vehicle in a convoy traveling down Interstate 65 on Jan. 29. A motorist recorded it with a phone. The video immediately drew national outrage over the military flying a flag of a national leader and not the American flag.

Some motorists told the newspaper that the “Trump” flag gave the appearance of a fascist government or a “banana republic.” Others said that since Trump had already been sworn in as president and was no longer a political candidate, flying the flag was not improper.

Jack Murphy, a former member of the 5th Group Army Special Forces and the Ranger Regiment who is now the editor of SOFREP.com, told LawNewz why the Defense Department discourages such behavior, saying the regulations might “sound a bit silly at time, but the rules are in place for a reason because the military is a nonpartisan fighting force that serves Commanders in Chief from both political parties.”

Murphy said during his time serving, members of his unit could not even place a bumper sticker on their personal vehicles if it “arguably contained a political message.” 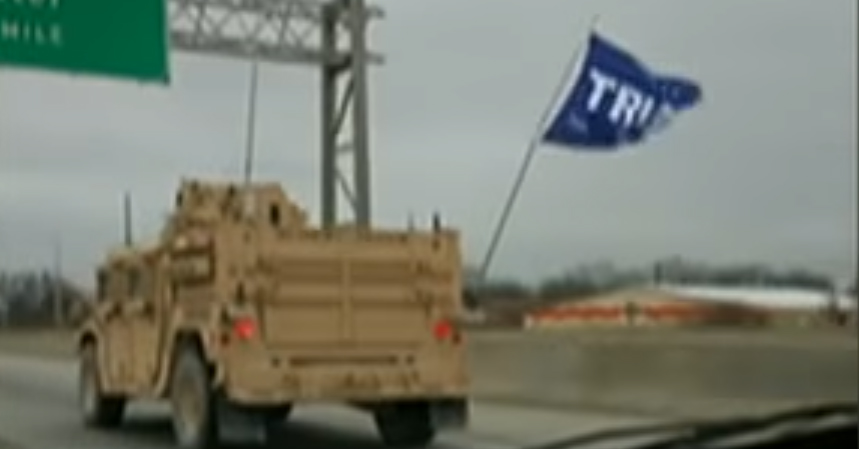