WASHINGTON — One day after Donald Trump took the presidential oath of office, the Women’s March on Washington, sponsored and partnered with dozens of women’s and human right’s organizations, brought together hundreds of thousands of people from all over the world to stand in solidarity with American women and everyone else concerned about President Trump and his administration. Rare was able to exclusively confirm that Diane Guerrero, Scarlett Johansson, Padma Lakshmi, Julianne Moore, Debra Messing, Uzo Aduba, Olivia Wilde, and Constance Wu were in attendance, but several other celebrities made appearances as well, including America Ferrera, Katy Perry and Alicia Keys.

No matter where you were today… We sent a powerful message! https://t.co/vj0j1Xvxvy #WomensMarch #WhyIMarch #WomensRightsAreHumanRights pic.twitter.com/wd8wM7D5hV

Laura Schroeder traveled all the way from Madison, Wisconsin, with her young daughter Lilas and her mother Lynda Cantrell — three generations of strong women — to make their voices heard.

“I am marching for human rights, equality, women’s rights,” Laura shared with Rare as Lilas smiled shyly. “And I am marching for my daughter, so her life in the future will be for stronger women and stronger equality.”

“I’m marching for my daughter and granddaughter,” Lynda echoed, adding that she was dedicating her march to her mother who passed away in 2006. “For maintaining the same rights that we received years ago that we still should be having and should not be in question about.”

Betty Schauten from Asheville, North Carolina, also attended with some family members, a cousin and her daughter and niece.

“I’m marching for these girls,” she said putting an arm around her family. “So that the future works for them, and their power can be expressed.”

Further down the National Mall, marchers proceeded past the Washington Monument and right up to the White House chanting bold statements — “My body, my choice” from those marching in support of Planned Parenthood, “Abortion hurts women” from Students for Life, and “This is what democracy looks like” and “We need a leader, not a creepy tweeter” from just about everyone.

Although women were the focal point of the demonstration, marchers championed a variety of causes in order to speak up for everyone who is fearful of what the Trump presidency will bring. In addition to women’s rights, marchers held signs in support of climate change research, Black Lives Matter, LGBTQ+ rights, the Affordable Care Act, undocumented immigrants, and even ones that read “Free Melania.” Hundreds of “I’m With Her” signs, pins, and shirts were proudly on display in an effort to remind the president that, while he may have won the election, more people chose to cast their votes for his opponent Hillary Clinton.

This is what democracy looks like. #WomensMarch #WhyIMarch pic.twitter.com/EjVay17UDV

“Today brought me back some of the hope I lost on Nov. 8 for the future of our country,” said Taylor Park, a young professional from Virginia. “I’m eager to see how our new president will respond to the historic, post-Inauguration Day marches around the globe.”

Honored to stand with women who are unafraid and alone. We are here and will be heard! #WomensMarch #womensmarchhouston pic.twitter.com/COuQbFvJYe

Dozens of sister marches popped up across the United States and even one in London, pooling together over 500,000 people in Washington, D.C., who sent a clear message to President Trump that women aren’t going anywhere and won’t be silent, apologetic or easily defeated. More importantly, he should now be aware that this is just the beginning because women are prepared to put up a fight for the next four years.

Beautiful end to the #WomensMarch. This is just the beginning. #WMWArt pic.twitter.com/B8ffACzmT4

RELATED: Hear why thousands of people flocked to D.C. for the Women’s March on Washington 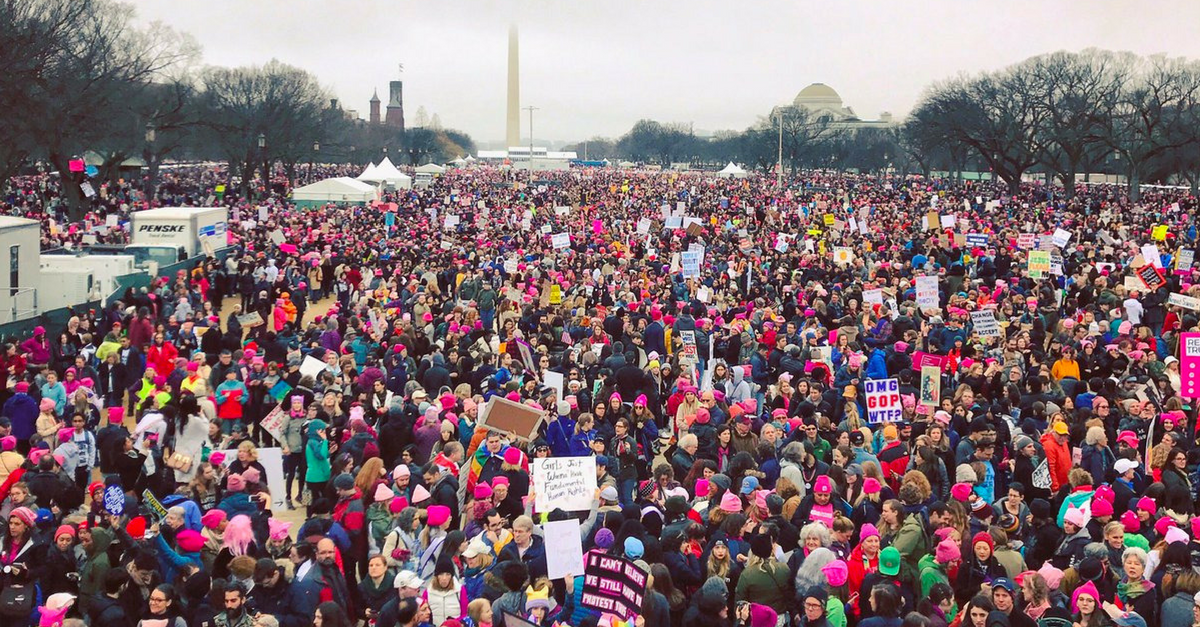