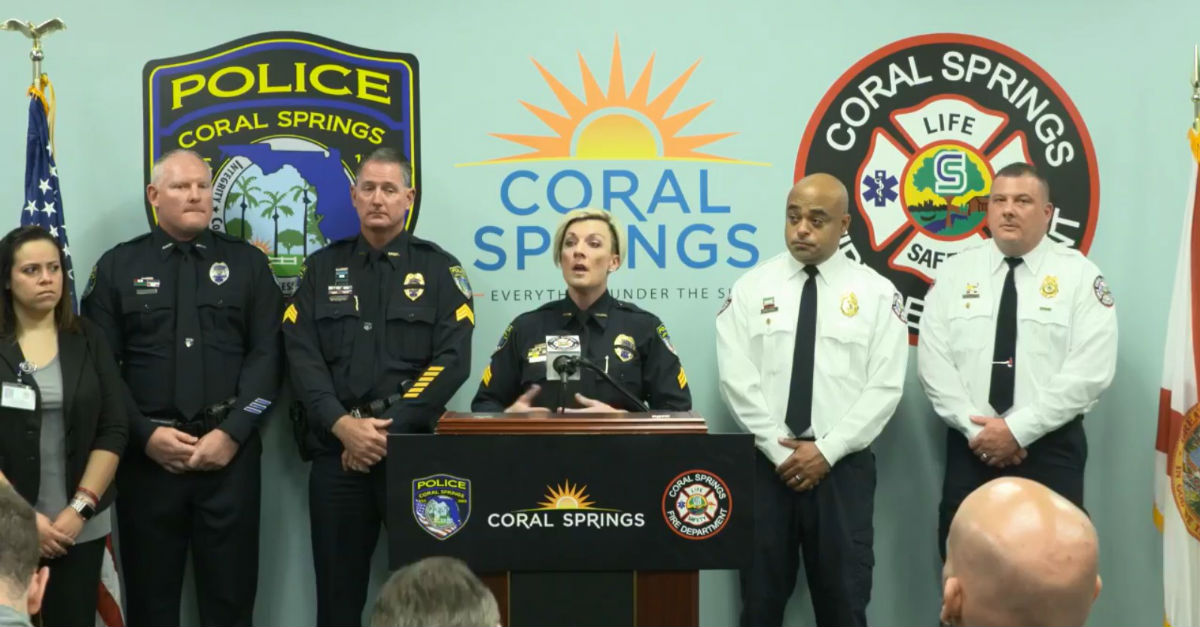 A few officers are being recognized for their decision to act following a disturbing revelation about the behavior of other law enforcement officers during a fatal mass shooting at a Florida high school.

As Rare previously reported, at least four deputies with the Broward County Sheriff’s Office were on the scene of the Valentine’s Day shooting at Marjory Stoneman Douglas High School in Parkland before Coral Springs Police officers arrived. When the second group of officers showed, they were surprised to learn that the four deputies did not enter the school building. One of the deputies included Deputy Scot Peterson, the school resource officer. Peterson resigned earlier this week after he was said to have done nothing for “upwards of four minutes” while the shooter took the lives of 17 students and faculty inside.

While the deputies remained outside, taking cover behind their vehicles with their guns drawn, the Coral Springs Police officers made the decision to enter the school.

Among the brave officers who went inside were Officer Chris Crawford and Sgt. Jeff Heinrich — Heinrich was off-duty at the time, according to the New York Post. Crawford, who is an ex-Marine and a father of a two-year-old, said that the scene of the crime “was bad as you can imagine — times 10.” He recalled stuffing gauze into a 14-year-old boy who was shot in several places, including the back, shoulder, thigh, and arm. He also assisted a teen girl who had shrapnel in her body.

Crawford also said that he came across a group of students who decided to hide in a classroom. He slid his ID under the door in an effort to “negotiate” and convince them that they were safe. For this, he said, “I don’t blame them.”

Though Heinrich was not on duty, his wife and son were at the high school. He jumped immediately into action upon arriving on the scene and chose to care for a wounded student.

“It was surreal,” he said. “You never hope it would happen, and it did.”

Heinrich’s family was uninjured in the attack, all “by the grace of God.”

Even Julie Vidaud, who works as a dispatcher for the Coral Springs Police Department, did her part to help save lives. When a student caller asked her how to perform CPR on the injured, Vidaud refused. She made the decision believing that the movement would make the student another victim of the shooter.

“Well, I can’t risk her life to do that, though, so you’re kind of torn for a second,” she said, explaining the difficult decision.

More stories were shared at a Friday press conference.

The stream officially begins around the 10-minute mark.

Our First Responders will be speaking about their heroic actions taken on the day of the Marjory Stoneman Douglas High School incident. [Fast foward to 10 minutes in for start of stream]

RELATED: Here is the frantic call that one concerned woman made to the FBI about Florida shooter Nikolas Cruz