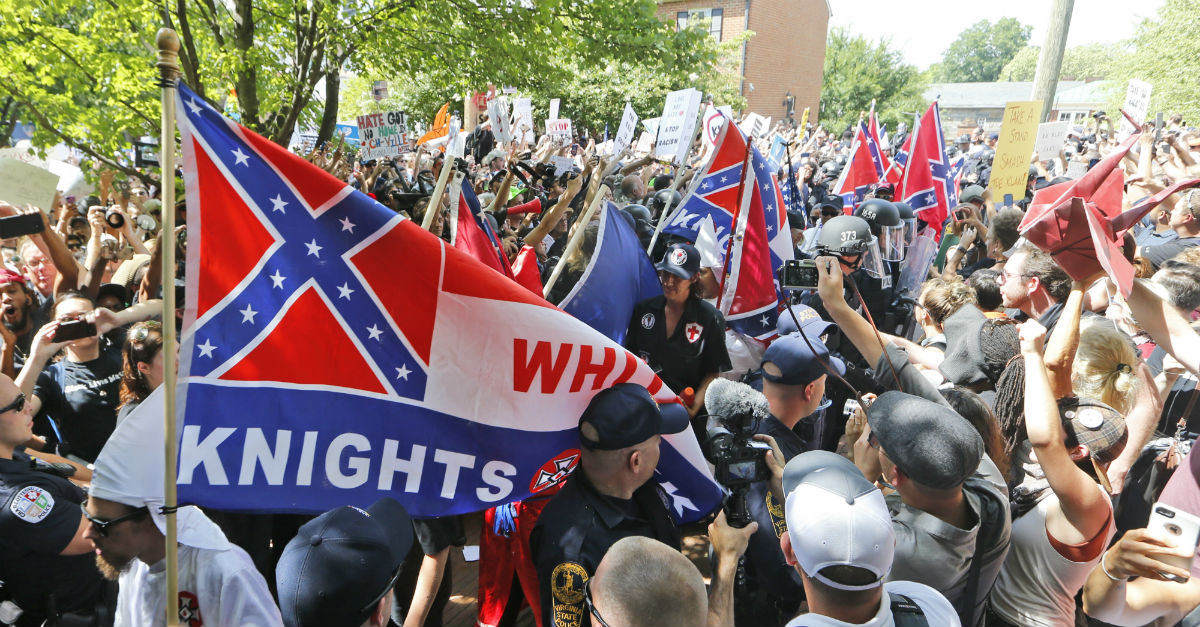 (AP Photo/Steve Helber)
This July 8, 2017 photo shows members of the KKK escorted by police past a large group of protesters during a KKK rally in Charlottesville, Va. Some white Southerners are again advocating for what the Confederacy tried and failed to do in the 1860s: secession from the Union. So-called Southern nationalists are within the group of demonstrators who are fighting the removal of Confederate monuments around the South. They say it’s time for Southern states to secede again and become independent of the United States.(AP Photo/Steve Helber)

Charlottesville, Va., is bracing for trouble Saturday as a “Unite the Right” march descends on Emancipation Park, just in front of a statue of General Robert E. Lee.

On Friday night, far-right activists marched through the University of Virginia campus carrying torches. The groups are protesting the city’s decision to remove the statue. Chants of “white lives matter” and “Jews will not replace us” rose from the crowd.

RELATED: Changing Robes | One man’s road to redemption with his family after almost 20 years in the KKK

The noon rally is shaping up “to be the largest hate-gathering of its kind in decades in the United States,” the Southern Poverty Law Center says. One alt-right personality, Jason Kessler, will be joined by members of the Warlocks Motorcycle Club — an outlaw club that operates in cities across the United States.

Friday night’s torch-lit march sparked a few isolated incidents of violence. Saturday’s rally is expected to elevate tensions as counter-protesters prepare to confront the event. Some church leaders are leading their congregations to the rally for the counter-protest. Barricades have been erected to separate the groups and the police have established a heavy presence in the park.

This is the second such rally in recent weeks. On July 8, a group of Ku Klux Klan members ventured into the city — a gathering that resulted in arrests and tear gas.