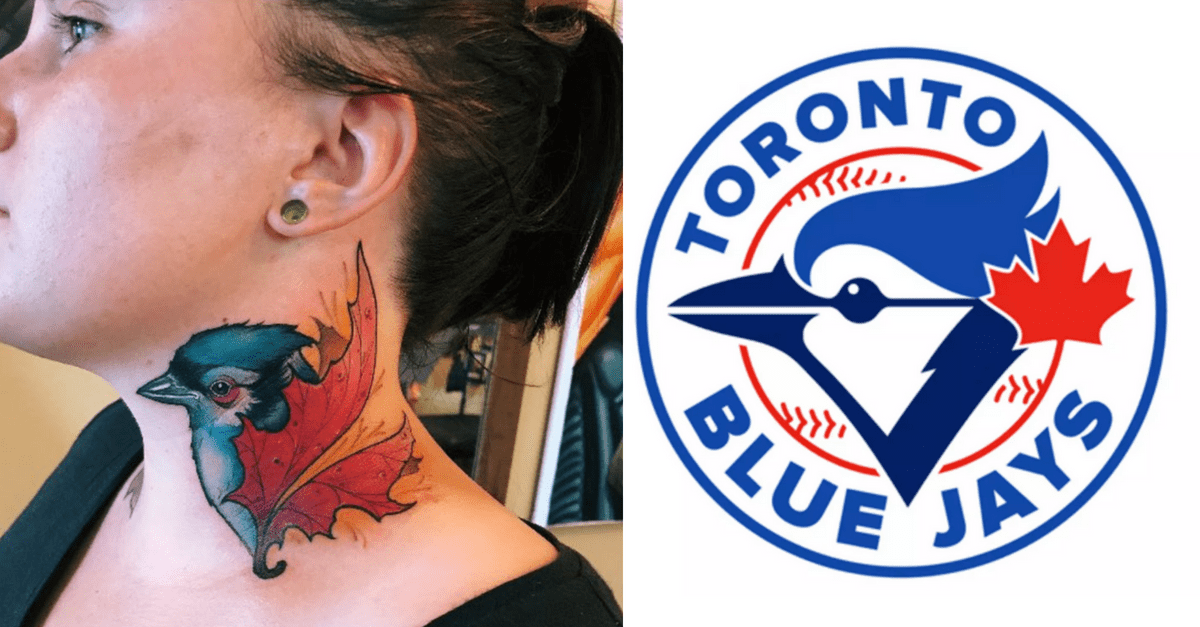 Neck tattoos: Not just for NBA players or sports fans anymore! 25-year-old Boston woman Amanda Fiske recently got inked up with what, presumably, she believed was both a beautiful and meaningful tattoo of a blue jay behind a red maple leaf. According to Vice, Fiske said the blue jay was representative of the jays that would visit her parents’ bird feeders, and the red maple leaf was meant to symbolize her love of fall.

Unfortunately for Amanda, she soon realized the funniest thing, that the blue jay tattoo also unintentionally expressed that she was, by the looks of her neck, a pretty die-hard Toronto Blue Jays fan. Like the type who wept at the news of Roy Halladay, has a shrine to Joe Carter in their basement, and thinks Roger Clemens looked pretty cool with bleached hair.

But to be fair, that’s only because her neck tattoo looks like an artsy reimagining of the actual baseball team, the Toronto Blue Jays logo. Cubs fan Jon Teegs found this major league play in two acts on social media and shared the screenshots side by side in a tweet.

According to Amanda, one of her friends pointed out the similarity pretty soon after she got the tattoo, which makes sense, considering the Red Sox and Blue Jays play each other 16 to 18 times a year in the MLB.

Really, she’s lucky she didn’t get a tattoo of a star-spangled top hat or anything that could be confused with a Yankees team logo. The Blue Jays aren’t very good and don’t have much beef with the Red Sox historically, though even considering that Boston has got to be one of the worst cities in America to accidentally have an extremely conspicuous tattoo of an opposing sports team. (Philadelphia, of course, is still the worst. Those people would break a bottle of Mickeys and stab you in the throat just for having a tattoo that said, “I like sports.”)

According to Amanda, she’s pretty much over all the attention the tattoo has gotten her.

Mmmmm it’s been two months and Vice reposted that article about my neck. I’m literally so over this shit

Pro-tip, Amanda, if you ever want to get a tattoo of a beloved family member or partner’s face, make sure they don’t look like Eli Manning before you go through with it. Pats fans will burn down your house for that. Maybe consult your tattoo artist first, too?

Editor’s note: This article was originally published on August 13, 2018.

Watch: These Are The 7 Least Painful Areas on Your Body to Tattoo