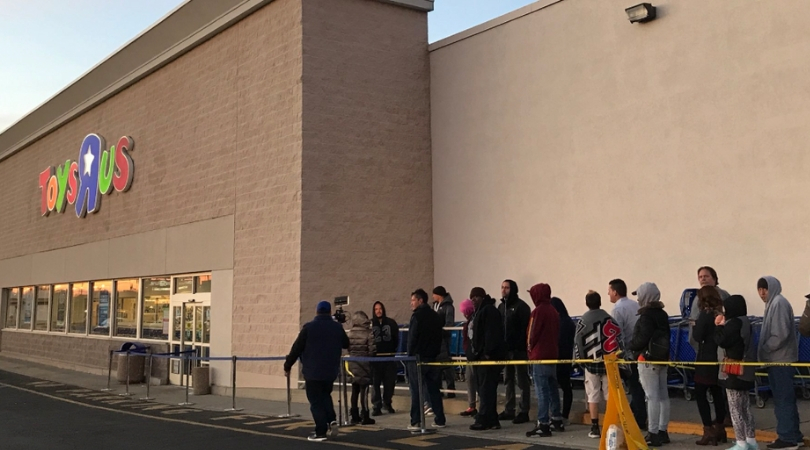 Geoffrey is back and better than ever! Toys “R” Us has announced they have canceled their bankruptcy auction, meaning….yes…they are making a comeback. Or at least attempting? The company has revealed their new plans, stating investors believe they have figured out a way to make more money, by using their secret weapon: Geoffrey the Giraffe.

The toy store broke their silence through a press release on their website, revealing the brand will be “re-imagined” showing a picture of the adorable giraffe, wearing a navy cape saying he was “back from vacation.” The brand announced that Toys ‘R’ Us is being officially rebranded as “Geoffrey’s Toy Box.”

Guess who's back? He’s been traveling across the globe for the past few months but now #GeoffreysBack and once again ready to set play free for children of all ages. Share some of your favorite memories and get ready to make a whole lot of new ones! https://t.co/g4IMRXLsFP pic.twitter.com/VB2MjhnzKj

According to their website, the revamped store is a wholesale toy distributor and intellectual property company whose “focus is on popular play patterns” across trust brands that children and parents love. Geoffrey’s Toy Box is a fully outfitted organization with design development and global sourcing expertise. Some of the brands include Fastlane, True Hero’s, Journey Girls, You & Me, Imaginarios, Just Like Home, and more!

The company also stated, “The reorganized company will own rights to the Toys “R” Us and Babies “R” Us brands in all markets globally, with the exception of Canada. It will also become the licensor of the brands to the company’s existing network of franchisees operating in countries across Asia, Europe, and the Middle East, and in South Africa.”

The sun did not shine, it was too wet to play. So we sat in the school, all that cold, cold, wet day. We sat there with Geoffrey, and we all said, “We love being a #ToysRUsKid!” #DrSeuss #ReadAcrossAmerica pic.twitter.com/hKyJiX5KhT

Consumer locations are expected to open up as soon as November. But, don’t be scared if it’s not like your favorite Toys “R” us…after the newly improved store plans on being a “shop-within-a-shop”, partnering with large retailers of open mini-locations inside the stores.

The popular store brand suffocated under a devastating $5 billion debt load before liquidating its assets this year. A leveraged buyout hobbled the company and hundreds of stores were shut down in June, hurting the toy industry. The company closed more than 800 stores, and more than 30,000 lost their jobs, less than a month later. Mattel cut more than 2,200 jobs due to the lost sales to Toys “R” Us.

Watch: These 100 Stores Will Be Closed on Thanksgiving Day 2018