Trump supporters are planning “The Mother of All Rallies” in D.C. — there’s just one problem 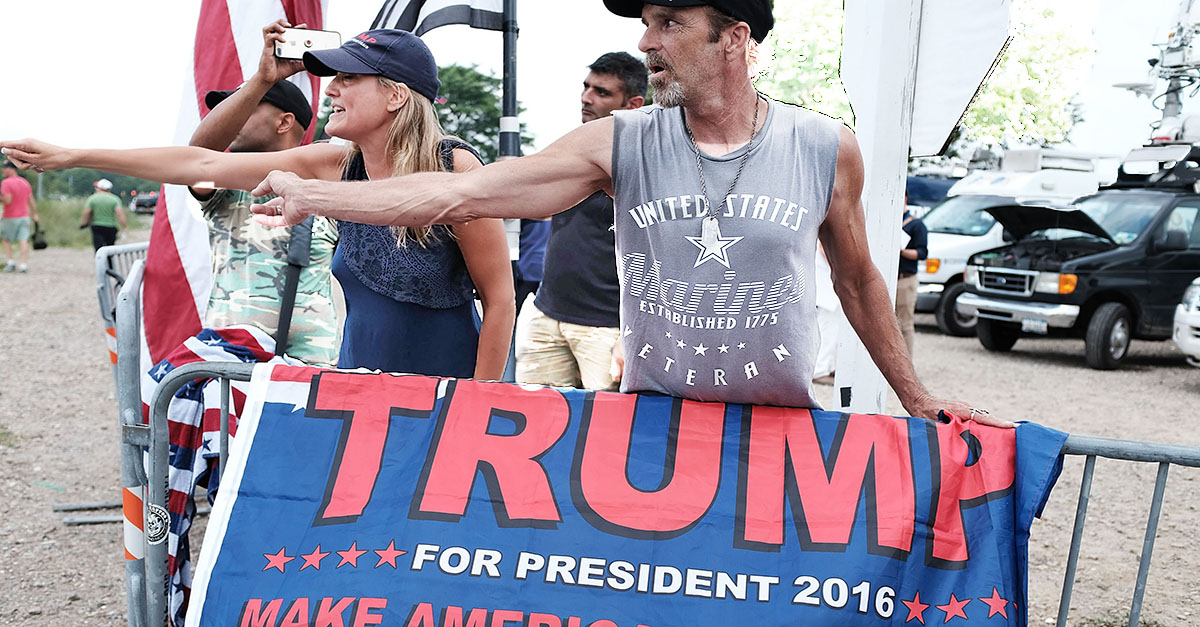 (Photo by Spencer Platt/Getty Images)
BRENTWOOD, NY - JULY 28: Supporters of President Donald Trump argue with anti Trump protesters outside of Suffolk Community College where President Trump was speaking on July 28, 2017 in Brentwood, New York. Trump, who was speaking close to where the violent street gang MS-13 had committed a number of murders, urged Congress to dedicate more funding to border enforcement and faster deportations. Trump spoke to an audience that included to law enforcement officers and the family members of crime victims. (Photo by Spencer Platt/Getty Images)

On Sept. 16, the Mother of All Rallies will descend on Washington, D.C., bathing the nation’s capital in red “Make America Great Again” hats and the rumble of probably more than a few motorcycles. The event is organized by Trump supporters who, according the website they’ve set up, are hoping to “send a message to congress the media and the world.” It’s being billed as an “all day and night rally for American culture,” and you’re urged to attend if “you believe in the founding fathers idea of America. If you believe we are the greatest country to ever exist.”

Trump-voters are definitely outsiders in Washington — only 4 percent of the district voted for the current president. So when the “MAGA” crowd arrives at the National Mall at 11 a.m., they’re hoping to make themselves known. On Facebook, the event page for the rally already has over 7,000 followers, and almost 4,500 people have said they’re interested in attending. Hopeful attendees include a bleach-blonde Florida woman who wrote that she will help drive an RV for anybody “willing to take large groups of Trump supporters” and another woman urging parents to get their children to join “The Young Patriots” in leading the Pledge of Allegiance. From the buzz, the rally is shaping up to be a great time for Trump fans.

Unfortunately for the Trump supporters, they won’t be the only group in Washington that Saturday. In fact, they won’t even be the only group on the National Mall. In December, a website went online for the “Juggalo March” that will take place on the National Mall by the Lincoln Memorial. They even have a countdown clock on their website, tracking the minutes until they appear en masse at the same steps where Martin Luther King Jr. declared his dream.

Juggalos are fans of the band “Insane Clown Posse,” an American hip hop duo who have garnered a cult following. They’re known for painting their faces in the style of the band, and they have a reputation for violence. In June, a Juggalo pleaded guilty to stabbing his grandparents to death. Last September, a Juggalo was accused of chopping off a woman’s finger and drinking her blood.

In contrast to their reputation, the Insane Clown Posse fans marching on Wasington hope to make a peaceful statement. In 2011, the FBI classified the group as a “loosely organized criminal gang,” but the band won their appeal in 2015 disputing that claim. On the website for the Juggalo march, the group notes that the stereotype of the violent Juggalo has been harmful to the community as a whole. They claim, “Over the past five years, our legal team has heard testimonies and reports from Juggalos all over the nation who have lost custody of their children, been fired from jobs [and] denied access into the armed forces.”

The juxtaposition of Juggalos and Trump supporters is sure to be an event for the ages. According to a January post on the Juggalo March Twitter feed, 17 bands have already agreed to play at the march. So while the Young Patriots are solemnly reciting the Pledge of Allegiance, there’s a very good chance a Juggalo cover band on the other side of the mall will be belting out the chorus to their hit song
“My Axe,” declaring, “My axe is my buddy, don’t take him for a chump. Me and my axe will leave you hopping on a stump.”

RARE has reached out to the organizers of both rallies but has not received any comment.