Trump supporters promise to #BoycottStarbucks after the company’s CEO pledges to hire 10,000 refugees 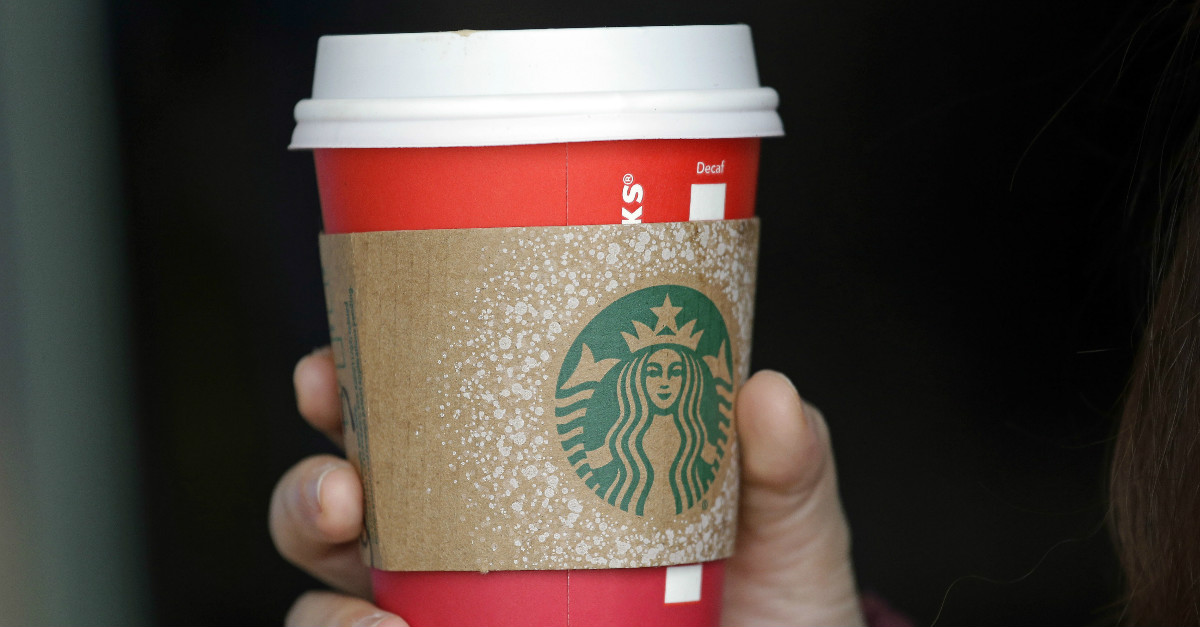 AP Photo/Elaine Thompson
A customer carries a coffee drink in a red paper cup, with a cardboard cover attached, outside a Starbucks coffee shop in the Pike Place Market, Tuesday, Nov. 10, 2015, in Seattle. It's as red as Santa's suit, a poinsettia blossom or a loud Christmas sweater. Yet Starbucks' minimalist new holiday coffee cup has set off complaints that the chain is making war on Christmas. (AP Photo/Elaine Thompson)

Tensions have been running high in the U.S. since President Donald Trump announced an executive order banning citizens of seven predominantly-Muslim countries from entering the country last Friday. Many Americans have protested Trump’s order, among them the CEO of Starbucks, Howard Schultz.

On Sunday, Schultz announced that in response to Trump’s executive actions, Starbucks will hire 10,000 refugees at locations around the globe. Schultz criticized Trump’s policy and outlined the company’s plan of action in a letter to employees.

RELATED: Starbucks reacts to Trump?s travel ban with a huge announcement about 10,000 jobs

?We are developing plans to hire 10,000 [refugees] over five years in the 75 countries around the world where Starbucks does business,? Schultz said in his letter. ?And we will start this effort here in the U.S. by making the initial focus of our hiring efforts on those individuals who have served with US troops as interpreters and support personnel.?

As the Associated Press reported earlier today, Trump’s executive order institutes a 90-day ban on travel to the U.S. by citizens of Syria, Iran, Iraq, Sudan, Libya, Somalia and Yemen, as well as a 120-day suspension of the refugee program. Syrian refugees — those who protestors of the policy note are the most vulnerable and in need of assistance — have been banned from coming to the U.S. indefinitely.

Trump supporters did not take kindly to Starbucks’ promise to employ refugees and took to social media to express their outrage. The hashtag #BoycottStarbucks began to trend on Twitter.

I hate and despise what #starbucks stands for #BoycottStarbucks

I love Starbucks, but they decided to jump into the political world instead of focus on coffee. Screw you. #BoycottStarbucks

100 million people are out of the work force and Starbucks wants to hire 10,000 refugees. #BoycottStarBucks #AmericaFirst

While President Trump is working to get Americans jobs, Starbucks CEO wants to hire 10,000 refugees.

Happy to see this trending.

I forfeited my daily cup of Starbucks this morning. I'll get used to it 😊. Onto Dunkin Donuts. #BoycottStarbucks #AmericaFirst

If even 1% are radicalized, that's 100 terrorist baristas. Enjoy ur exploding coffee @Starbucks. I'll go to Dunkin.https://t.co/86CmZBvVLS

Though Trump supporters began the hashtag to express their disdain for the company’s decision, #BoycottStarbucks was quickly commandeered by those in defense of the coffee company. As of 2:00 p.m. on Monday, the majority of the “top” tweets on Twitter incorporating the hashtag were critical of Trump and those encouraging Americans to boycott Starbucks.

Got worried when I saw #BoycottStarbucks trending, turns out they pledged to hire 10,000 refugees. Gonna buy myself some coffee.

So theres a #boycottStarbucks going around because they’re pledging to hire refugees: you know what that means: time to get some Starbucks

Imagine being so hateful that you'd create this hashtag #BoycottStarbucks bc the company is offering jobs to refugees who would need jobs.

Given that Starbucks’ annual revenue exceeds $19 billion, it’s safe to say that even a large boycott won’t affect the company’s bottom line too much.