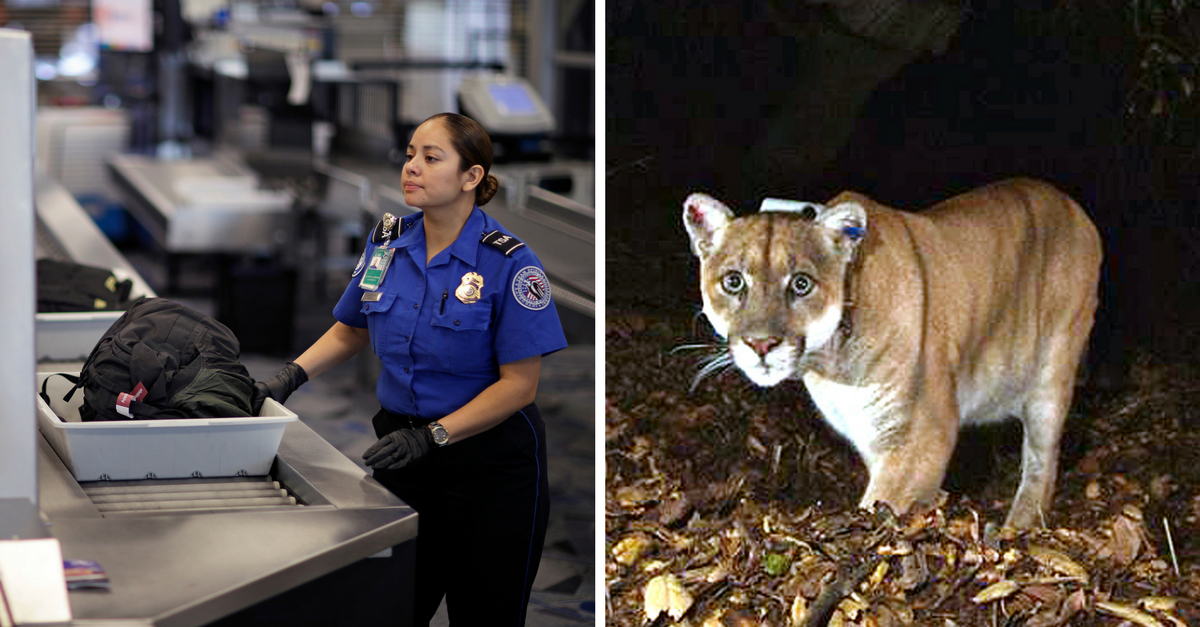 Left: AP Photo/John Locher Right: National Park Service, via AP, File
Left: In this Sept. 1, 2017, photo, a TSA officer grabs a bin for additional inspection at a newly installed automated security lane at McCarran International airport Friday, Sept. 1, 2017, in Las Vegas. Three reconfigured security lanes are equipped with upgraded features, including bins that are 25 percent larger and capable of holding roll-aboard luggage. (AP Photo/John Locher) Right: FILE - This Nov. 2014 file photo provided by the National Park Service shows the Griffith Park mountain lion known as P-22. The mountain lion that's a local celebrity has moved in under a Los Angeles home, and despite wildlife workers using a prod and firing tennis balls and bean bags at it, it appears unwilling to move. The animal, which has a red ear tag, is known as P-22 and normally lives in nearby Griffith Park. P-22 arrived in the area several years ago from the Santa Monica Mountains and crossed two freeways to get there. (National Park Service, via AP, File)

A holiday traveler’s plans were thrown into disarray when airport officials discovered he had a dead cougar stowed away in his suitcase.

Transportation Security Administration agents at McCarran International Airport in Las Vegas, Nevada found the carcass around 10 p.m. on Tuesday night when the man’s luggage caught their attention while going through a security screener, according to Metropolitan Police Lt. David Gordon. Although the cougar appeared to have a Utah State Fish and Game tag on it, officials still had to hold the man at the airport while they worked to confirm the validity of the tag.

It was eventually determined that the tag was valid, but the man — whose identity has not yet been publicly released — ended up shipping the carcass home in another manner instead, according to airport spokeswoman Melissa Nunnery. She was unaware of where exactly the dead cougar was being shipped, however.

“It is not a crime to transport game that is legal to possess via airlines,” Lt. Gordon said. “However, airlines reserve the right to tell passengers they do not want to transport certain items.”

Therefore, the man was not arrested or charged with any crimes. As he had not done anything illegal, he continued on his way after airport officials were done holding him. We can only hope both he and the dead cougar made it home in one piece.

A @TSA agent at @LASairport discovered a dead cougar in a man's luggage Tuesday night, according to @LVMPD https://t.co/lX5QwtqqPr pic.twitter.com/ZN8WjrDrmg

RELATED: The reason planes at a major airport are just sitting there has thousands tearing their hair out