Man Wanted For Urinating On American Flags At Veterans Cemetery 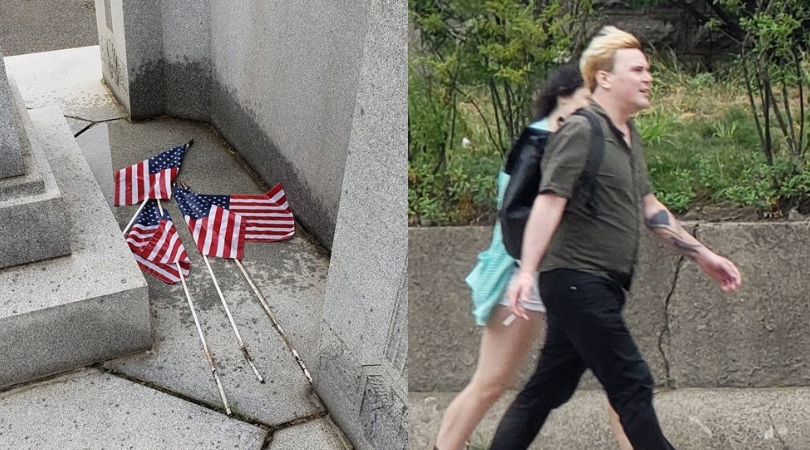 Massachusetts police are searching for a man after he was seen urinating on several American flags at a veterans cemetery. George Gatteny, who witnessed the situation, posted pictures of the vile act, stating he was ?outraged? due to the disrespect. Gatteny spotted the suspect among a group of people on Sunday, September 9, at the World War ll Memorial in the Somerville Veterans Cemetery.

According to the man?s Facebook post, he saw two young people approach the statue, grab four mini flags that were placed in front of the statue and the man unzipping his pants. The man began to urinate on the flags while the woman next to him acted as a lookout, only stopping when Gatteny yelled at him. The man allegedly turned around, pulled up his pants and started walking out of the memorial laughing.

In a state of rage, Gatteny was determined to get photographs of the couple so they could be accountable for their actions. Gatteny followed the couple, went back to the memorial to photograph the flags, and headed to the Somerville Police Department to give a statement and the photos. In the pictures, one can clearly see the flags appear to be drenched in what is presumed to be urine. Somerville Police Deputy Chief James Stanford stated the police department is aware of the Facebook post and have opened an investigation. Proper consequences are said to be given.

Gatteny’s post has generated more than 20,000 likes and shared more than 50,000 times. The city?s mayor, Joseph Curtatone, condemned the incident, expressing the act of vandalism as ?despicable?, not only offensive to the community and the veterans, but to the entire nation who have served and are currently serving. The Somerville Veterans Service Department also took to social media to comment on the situation asking anyone who may know the people in the photos in question to contact police.

Desecrating a U.S. flag is not illegal due to strong freedom of speech laws. The Supreme Court has found laws banning desecration of the American flag to be unconstitutional. The court ruled it falls under the First Amendment protection of free speech. If you have any information about the individuals in the photos, you are asked to contact the Somerville Police Department.

Watch: Everything You Need to Know About Displaying the American Flag