Applebee’s Waitress Given Racist Note on Napkin Instead of Tip 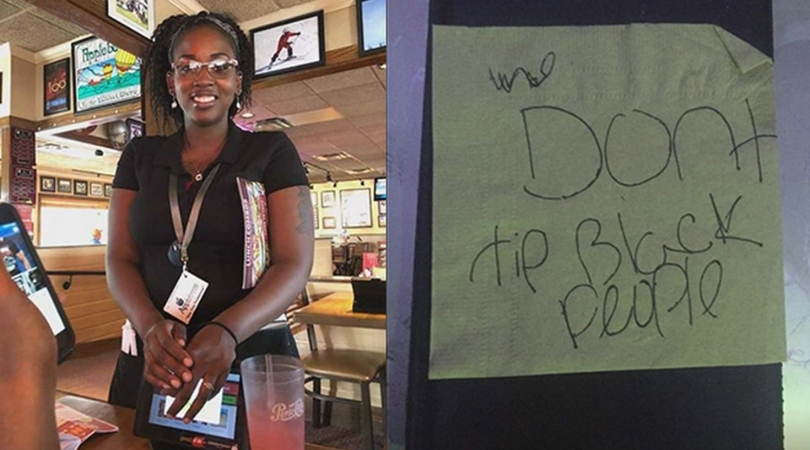 A woman in Kentucky is claiming her daughter, a waitress at Applebee’s, was left a racist note instead of a tip during her shift. Regina Boone shared her daughter’s story to Facebook, stating Jasmine Brewer received the tab from a party of four, two men and two women, earlier this month.

According to the post, written on the back of a napkin was a note that read, “We don’t tip black people.” Regina was shocked since she didn’t suspect the customers had any issues until she found the note. The incident left Brewer hurt and embarrassed, saying she can only hope racism isn’t an issue by the time her 3 children grow up. The mother, who is a teacher at G.C. Burkhead Elementary School, decided to share their story, writing, “This is why they kneel! I’m very vocal and always will be! You think racism doesn’t exist, IT DOES!”

The social media outrage prompted people to send Jasmine the tip she should have received, donating nearly $200. A spokesperson for Applebee’s released a statement in response to Boone’s post, saying all restaurant team members deserved to be treated with dignity and respect. All remarks towards their franchise’s employees are inconsistent and unacceptable with the restaurant’s values as a brand.

Brewer has been working at Applebee’s since July and said this is the second time a customer has left a racist note and no tip. She remembers the group she served as ‘standoffish’ and didn’t say much to her.

This is not the first time a waiter received a note from customers regarding their race. In July, a waiter from a restaurant in Texas claimed he received a racist note while waiting tables, but after investigation, the note turned out to be fake. Khail Cavill, 20, posted a recipe with a note in July, reading “We don’t tip terrorists” on his Facebook Page.

Cavil said he received the note on top of his $108 receipt while waiting tables at the Saltgrass Steakhouse in Odessa, Texas. COO Terry Turney released a statement of the incident, saying the 20-year-old lied about the note, and apologized to the customer accused of leaving the note, inviting them back to dine a the restaurant.