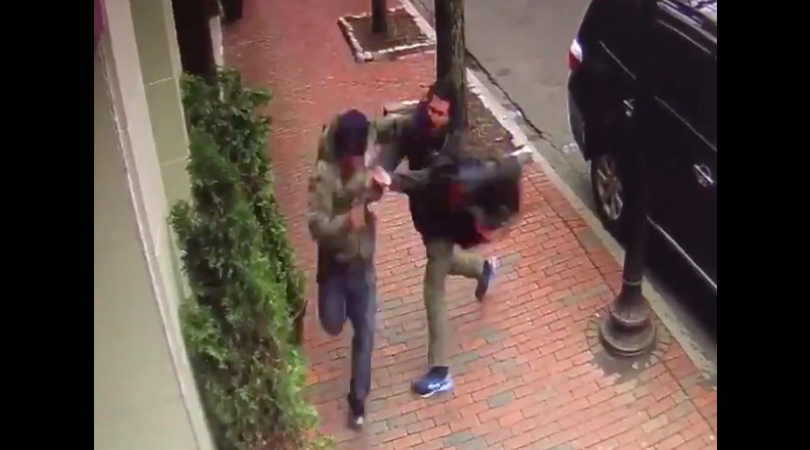 If you were in a position to stop a bank robber what would you do? Really you should probably just let the cops handle it. That money is insured. The bills they took are probably covered in blue dye. They’re literally worthless as soon as someone declares them to be. Do not get murdered over paper that didn’t even belong to you. Nobody wants to have their mom crying over their casket, asking their dad, “Had he never heard of the FDIC?”

But, also, if it’s a pretty consequence-free situation then why the hell not? Yeah. Push that jerk down and stop him from stealing easily replaceable stuff. That’s what Massachusetts man Dave Powers did. The web developer saw a bank robber running through Somerville’s Davis Square after robbing Middlesex Federal Savings Bank and was like, “Not today, jerk.”

Oof. That guy got wrecked. And he deserved to. Not just for committing a crime (and shooting at cops with the gun he had) but for committing a dumb crime. This isn’t the 1920s. There might not be a more likely crime to get caught doing than robbing a bank other than indecent exposure committed in a police station.

Powers explained why he intervened to 7News Boston:

“I saw the suspect fleeing and I could tell he was being pursued by a police officer. I was in position to react. So I did, just hoping to slow him down so he could be apprehended by the police officer.”

Hopefully, he said something cool right after, like “Take that to the bank,” or, “Have a nice trip, see you in hell bitch.”

The robber dropped his bag and gun after the body check and ran off. Someone call the Boston Bruins and have Dave Powers do the ceremonial puck drop for their next home game. Or maybe a ceremonial first cross check.