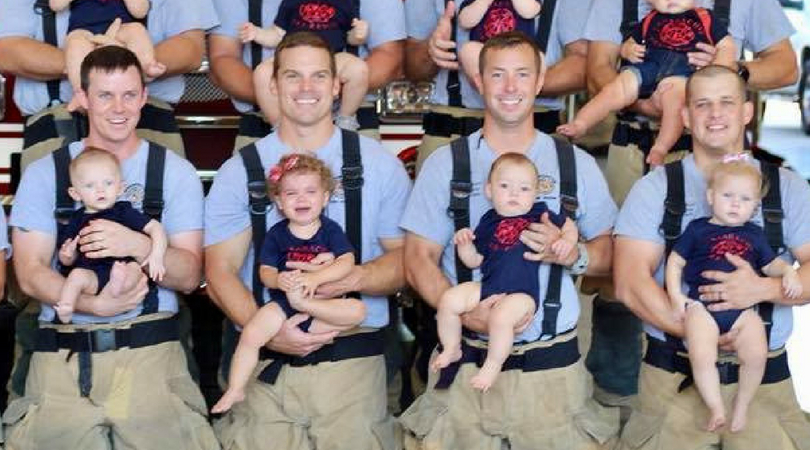 Texas firefighters of Ellis County are breaking the Internet again, but this time, with the help of adorable baby humans! Yes, the Waxahachie Fire Department is “alerted” the public not to drink the water at their fire station, after four of them became new dads in just the last year. The total amount of babies? 15! 14 Waxahachie firefighters and their firefighter wives have a total of seven boys and eight girls. Safe to say they had their own baby boom, huh?

The Texas fire department shared a Facebook post of the firemen holding their children. The youngest is just six weeks old and the oldest is 18 years old. The new moms of the Waxahachie Fire-Rescue Department are also now planning a future photoshoot of the firefighters with all the babies together. I mean, let?s be honest, who doesn?t like firefighter calendars? Add some babies and a fire truck in the group photo, and disastrous fires might start from all the hotness!

Of the 51 people working in the fire department, 14 of them have newborns, and one firefighter even has twins! Users online were commenting on the Facebook page how he must have had a bit too much to drink, stating, ?One guy must have drank a lot of it… he?s holding 2!!!?. Oh social media, gotta love it!

The photo has been shared more than 700 times, showing how things happen unexpectedly. The firemen and their families said the ?baby boom? has created a tighter bond within the fire department since they are all in the same line of work. They share a lot of the same problems and concerns in their family lives and when it comes to the home front, so when they come to work, they get to share that with their second family. Safe to say these Waxahachie fire-rescue families already have their Christmas cards set, and everyone in the city of Waxahachie should receive one automatically. Can this become a challenge? I’m looking at you Texas Rangers.

Editor’s note: This article was originally published on August 28, 2018.