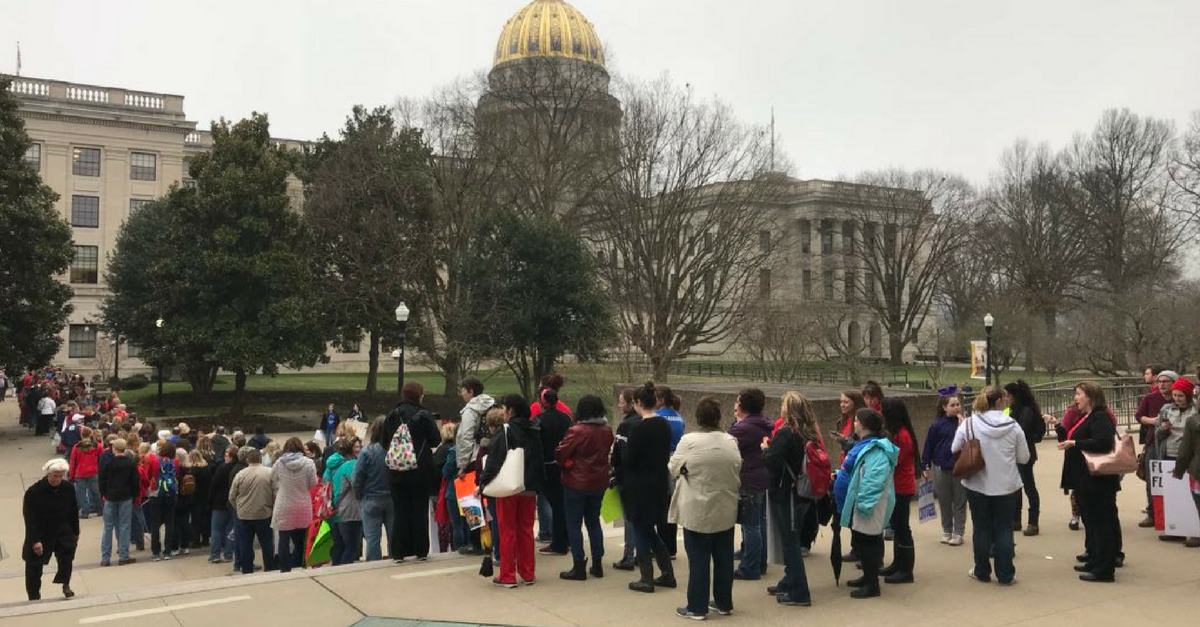 Teachers across the state of West Virginia — where beginning educators make just $32,435 a year and the average teacher salary is $44,701 — walked out of work on Thursday, forcing all public schools to close, in order to march to the state Capitol in protest of their low salaries.

“Work stoppages by public employees are not lawful in West Virginia and will have a negative impact on student instruction and classroom time,” West Virginia Superintendent of Schools Steven Paine said in a statement this week. “Families will be forced to seek out alternative safe locations for their children, and our many students who depend on schools for daily nutrition will face an additional burden. I encourage our educators to advocate for the benefits they deserve, but to seek courses of action that have the least possible disruption for our students.”

Regardless, thousands of demonstrators flooded the state Capitol even after Governor Jim Justice announced on Wednesday that he signed legislation to give teachers and state police a two percent raise, saying, “We need to keep our kids and teachers in the classroom. We certainly recognize our teachers are underpaid, and this is a step in the right direction to addressing their pay issue.”

However, Kym Randolph, West Virginia Education Association director of communication, made it clear that pay and benefits were just a small portion of what the teachers were protesting.

The strike is expected to continue on Friday, but it’s unclear what will come after that.

RELATED: Florida teacher’s sincere response to the murders of 17 shared 600,000 times — and counting

“We are assessing the situation,” Christine Campbell, president of the American Federation of Teachers-West Virginia, said. “We are going to make a determination some time [Friday] on whether or not it’s necessary to take additional action and what that action might be.”

Either way, West Virginia teachers are feeling empowered and are not planning on backing down.

“I’ve never seen anything like this, since I’ve been here,” Campbell continued. “They’re reading bills. They’re talking about it on social media. They’re understanding the process better. They’re reaching out to the legislators at record numbers.”