A 1993 letter from President George H.W. Bush to his successor, President Bill Clinton, resurfaced Thursday morning in the wake of Republican presidential nominee Donald Trump’s debate performance. During Wednesday night’s debate, Trump refused to say whether he would respect the results of the 2016 election if he were to lose.

The letter from Bush to Clinton has been hailed as the epitome of political class. In it, Bush offers Clinton advice about how to handle the tough moments that come with being the leader of the free world.

“A long, long time ago, politics had grace,” Twitter user Saba Gul wrote of the letter.

A long, long time ago, in a land far far away, politics had grace. George H.W. Bush's letter to Bill Clinton on leaving office: pic.twitter.com/bJn6ojWRS4

In the heartfelt letter, Bush explains how he felt upon walking into the Oval Office for the first time as President of the United States.

“When I walked into this office just now I felt the same sense of wonder and respect that I felt four years ago. I know you will feel that, too,” Bush writes. “I wish you great happiness here. I never felt the loneliness some Presidents have described.”

According to Bush, Clinton should never let his critics discourage him as he battles through the good and bad.

RELATED: New photos show how George W. Bush reacted in the moments after the 9/11 attacks

“There will be very tough times, made even more difficult by criticism you may not think is fair. I’m not a very good one to give advice; but just don’t let the critics discourage you or push you off course,” Bush writes.

The former president then concludes with a note of salutation, reminding his successor that a president’s success is equated with a country’s success.

“You will be our President when you read this note. I wish you well. I wish your family well,” Bush writes. “Your success is now our country’s success. I am rooting for you.”

Bush’s letter to Clinton was revealed in 2011 by historian Brad Meltzer.

Over 15 years later, Bush’s son, President George W. Bush, continued the ritual of leaving a note for a successor with a letter to President Barack Obama.

“I won’t provide any details, but the theme is similar to what he’s said since election night about the fabulous new chapter President-elect Obama is about to start, and that he wishes him the very best,” Perino said of Bush’s letter. 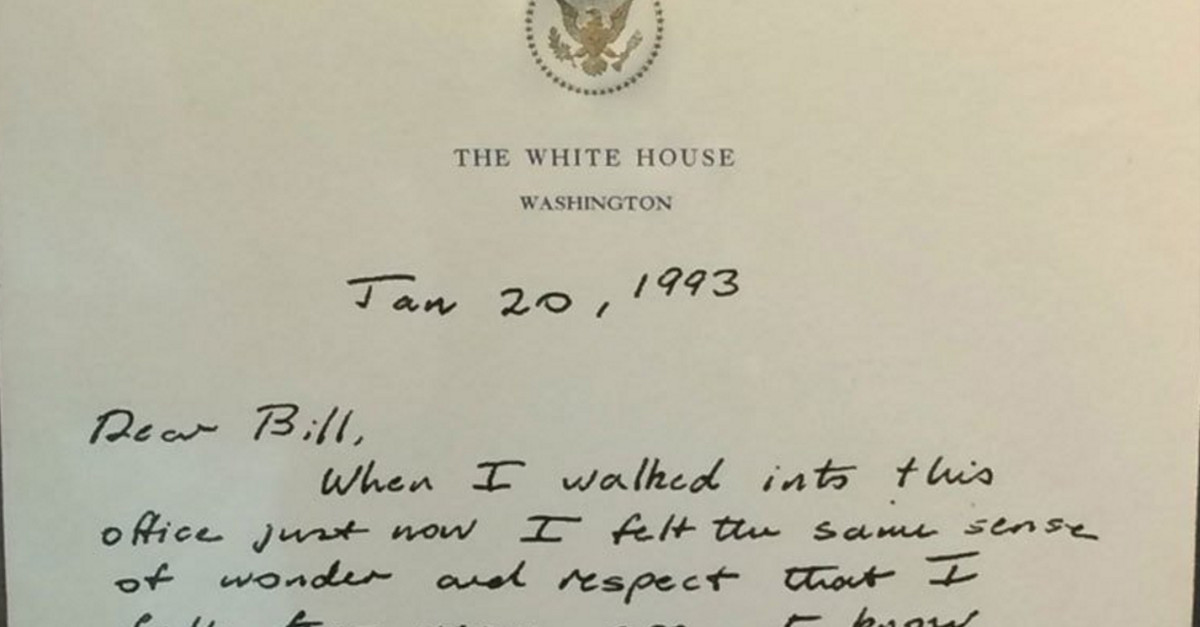