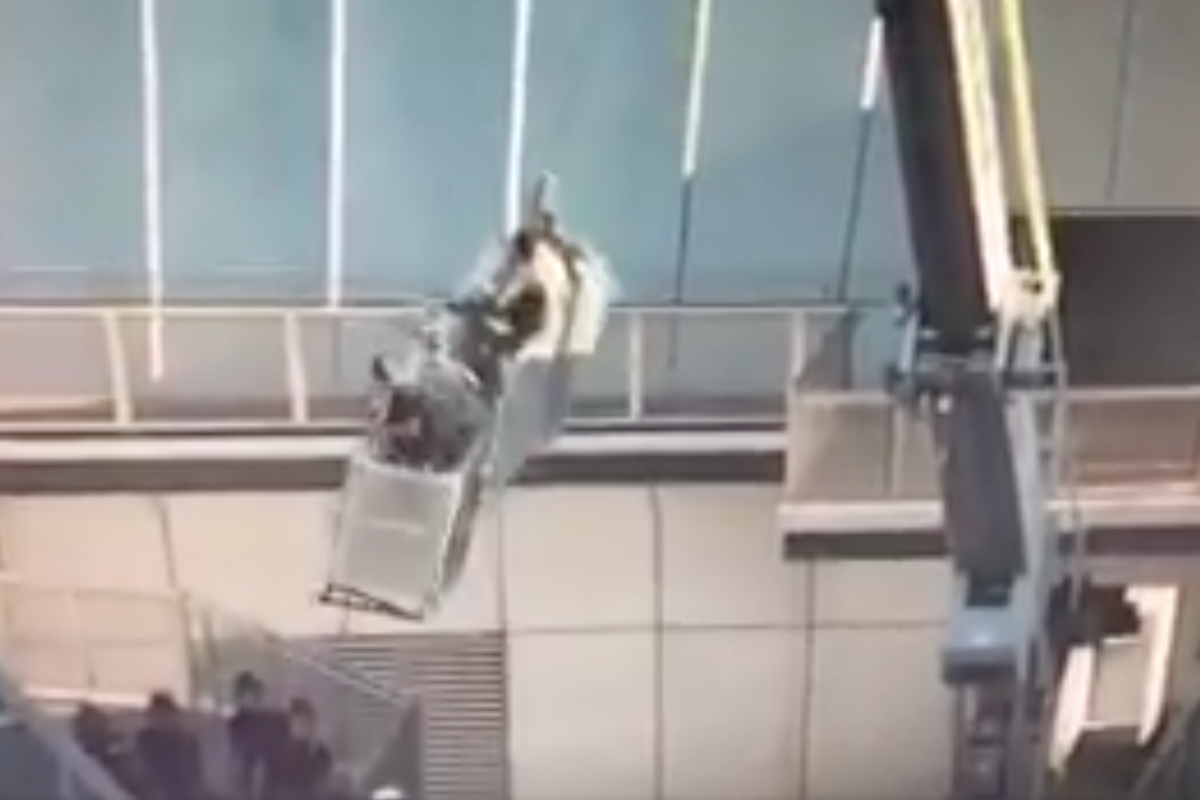 If you aren’t a fan of heights you might not want to watch this video. Conversely, if you’re a fan of NASCAR solely for the crashes, then welcome. This video is right up your alley. You monster. (But we’re providing the video and making money off it so who are we to judge?)

Two window washers in Oklahoma City were busy cleaning the top stories of the Devon Energy City Building, which is the 10th tallest building west of the Mississippi River, when, unless either of the guys is irrationally afraid of spiders or something, their worst nightmare became reality. A malfunction with the lift basket detached it from the building and caused it to sway wildly in the wind. Both window washers were stuck with nothing to do but hang on for dear life.

#BREAKING: This is TERRIFYING. Two window washers stuck at the top of the Devon Tower, swinging. Fire crews are attempting to rescue them. This video from Sky 5…. @koconews pic.twitter.com/WepdrS0aHe

TERRIFYING! Two people became trapped on a swinging lift on top of the Devon Tower in Oklahoma City. They have been rescued and are safe! Sky 5 was on the scene during the rescue >> https://t.co/QQtAuGnCdR #OklahomaCity #BreakingNews #KOCO5 pic.twitter.com/dkof8R7S39

What do you even do in that situation? Hang on for dear life and pray? Laugh and assume you’re already dead, and treat every second you get to stay on Earth after that is a bonus? Barf on the people below you shooting an Instagram Live video of your impending death?

All things told, it took the Oklahoma City Fire Department about thirty minutes to get the basket secured, which is both an excellent response time but also a really long time to wonder if you’re going to be turned into a pile of mush.

By 8:25 a.m. the lift basket was secured and the window washers were rescued from it shortly after. Then, hopefully, by about 9:30 a.m. at the latest, both window washers were at whatever bar is open in the middle of Oklahoma on a Wednesday morning, getting absolutely destroyed on expensive liquor and beer. God knows they deserve it.

All’s well that ends well so hooray that these guys are alive. And if either them were like, “Never again, I’m out” then good luck on your job searches!