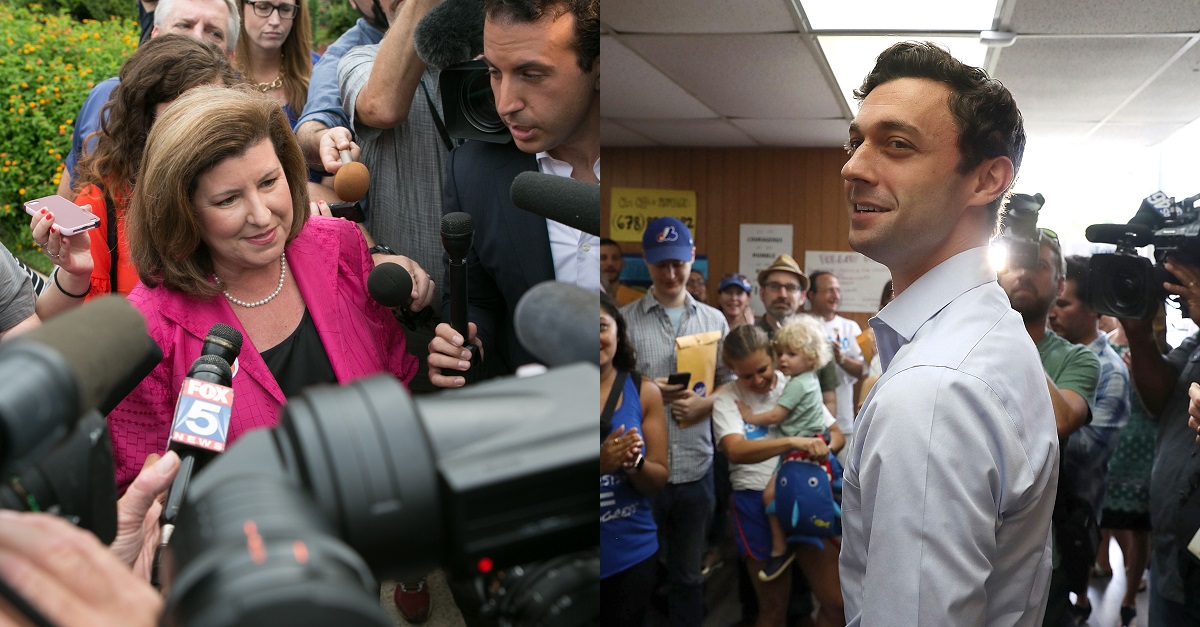 L: Jessica McGowan/Getty Images R: Joe Raedle/Getty Images
ROSWELL, GA - JUNE 20: Republican candidate Karen Handel is surrounded by media after voting at St. Mary's Orthodox Church of Atlanta in the special election for Georgia's 6th Congressional District on June 20, 2017 in Roswell, Georgia. Handel and Democrat Jon Ossoff are running against each other in a special election to fill the congressional seat vacated by Secretary of Health and Human Services Tom Price. (Photo by Jessica McGowan/Getty Images)

Cobb, Fulton, and DeKalb Counties make up the Sixth District, which occupies most of the northern Atlanta suburbs. Two of the three counties voted for President Donald Trump in 2016. Representative-elect Handel will occupy the House seat vacated by current Secretary of Health and Human Services Tom Price.

Democrats hoped to make the special election a referendum on President Donald Trump, and some polls suggested they could, even though special elections are notoriously hard to predict (and strong storms in the state further complicated the matter). While the New York Times called the race “quite possibly the most consequential special election since Watergate,” the district has voted Republican for forty years.

Early vote returns hinted at a nail-biter of a finish, but as the night went on, Handel pulled away with a lead of over 10,000 votes.

It was the most expensive House of Representatives race in United States history. The Atlanta Journal-Constitution reports that a combined $50 million was spent by Democrats. Republicans and outside groups working to influence the vote.

Last week’s assassination attempt at a practice for the Congressional Baseball Game happened at the height of the campaign, and was used against Democratic candidate Jon Ossof, despite bipartisan calls not to politicize it.

A Republican outside group that spent over $6 million in the race aired an ad that connected Ossof to the shooting and promised more violence if he won.

RELATED: A shocking political ad in the Georgia special election ties the Democrat in the race to the Scalise shooting