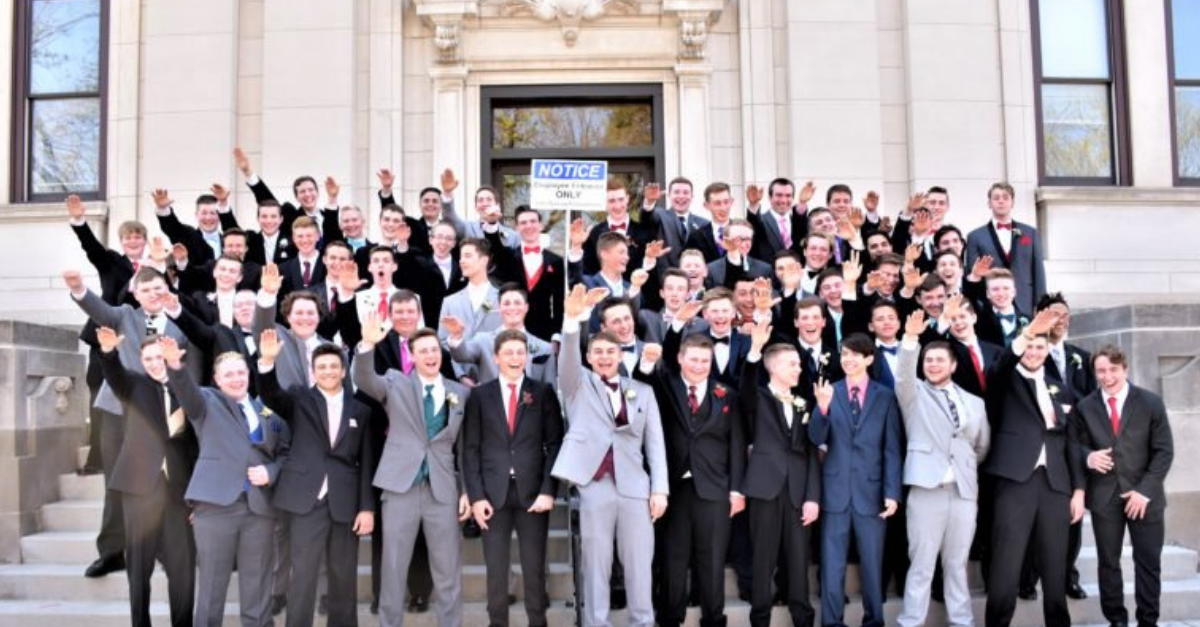 The junior boys from the class of 2019 at Baraboo High School in Wisconsin had a terrible idea. An inexplicably terrible idea. An idea so bad that had a guy been drunk driving past them a motorcycle, at 100 mph, without a helmet, would have stopped and been like, “Hey boys I don’t think this is a good idea.” The idea was, “Use your tongue to clean a loaded gun” levels of bad.

Then they did that idea. Now they’re in trouble.

What did the male students of the junior class at Baraboo High School do? Oh just your casual Nazi salute to celebrate their junior prom. As is tradition in Wisconsin? Based on the outrage, no not really. The picture was first publicly admonished by Baraboo High School student Carley Sidey.

this post has since been deleted, but i just want @barabooSD to be aware of the disturbing actions that are represented in this photograph. this is BEYOND sickening. pic.twitter.com/Fer5heTted

“We even got the black kid to throw it up.” That caption about their bad idea is such a bad idea in itself that if someone who’d already lost a foot to diabetes read it while crutching out of a Dairy Queen with bucket-sized Blizzard they would’ve stopped and been like, “Whoa this was not a good idea.”
At least one student — literally one student, actually — was not amused by the white nationalist gestures.

He’s in the top right corner and clearly looks uncomfortable. (Nazi stuff like the sieg heil will do that, though not as much as it should apparently.) He got into contact with Vice reporter Jules Suzdaltsev, who first broke the story, and explained what happened.

I spoke with the only student who is visibly not comfortable with the “salute”, he provided this statement. pic.twitter.com/HbNBc8xLOK So apparently a lot of kids at this school suck? Someone who would like to remain anonymous just sent me this message and picture of herself that was posted by a classmate.

Seriously, what is going on with this school? @BarabooSD pic.twitter.com/pHGbnelHct

Yeah. Definitely. A lot of kids at this high school suck.

Granted, these examples are all anecdotal, but when taken with the actual, definite Nazi saluting that’s happening, and the caption from the deleted tweet that was promoting it (which is even more damning, in my opinion) it’s pretty hard not to believe that some kids in this school are at least casually fans of Hitler, in an edge lord, bullshit, post-racism racism sort of way. That would definitely explain the white power comment after Trump was elected.

But how you really know the kids messed up is when you have the actual Auschwitz memorial Twitter chirping at you for your apparent Nazi salute.

It is so hard to find words…

This is why every single day we work hard to educate. We need to explain what is the danger of hateful ideology rising. Auschwitz with its gas chambers was at the very end of the long process of normalizing and accommodating hatred. https://t.co/13AzZaMGJR

What’s even weirder is that apparently the photographer, Peter Gust, asked the boys to do the salute in the prom photo. The adult. He definitely made their junior prom a memory that will last forever, so at least he did his job? Probably would have been better without the white supremacist stuff though.

It’s worth keeping in mind that these are teenagers, and teenagers have worse ideas than men from Florida, but still. There’s clearly a pattern here. Someone stop it before the kids become adults, please.