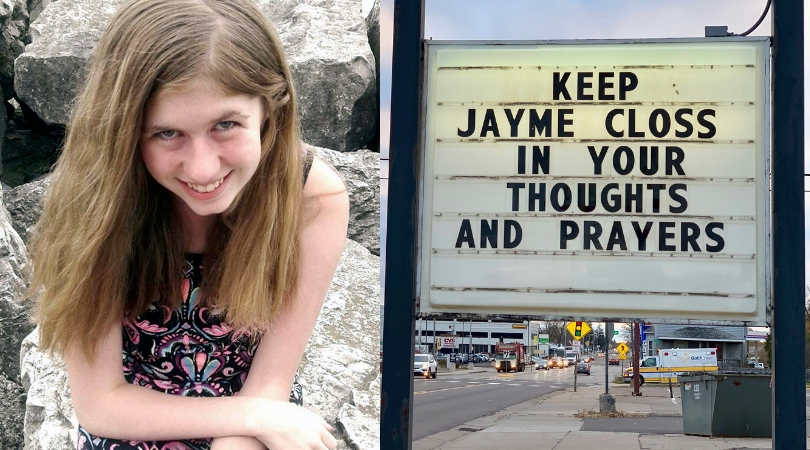 MINNEAPOLIS (AP) — The search for a 13-year-old Wisconsin girl whose parents were killed enters its 12th day Friday and investigators still haven’t said if they have clues as to what was behind the attack and suspected abduction. They have followed up on more than 1,700 tips and a $50,000 reward is being offered for information that leads to Jayme Closs.

But child abduction case experts say the need to find her grows more urgent with each passing day and that it’s important the public stay engaged, no matter how long it takes to find her. Here are some details:

WHAT HAPPENED TO JAYME?

She’s been missing since early on Oct. 15, when sheriff’s deputies responding to a 911 call found the door to her family’s home near Barron kicked in and her parents, James and Denise Closs, shot dead inside. Investigators believe Jayme was abducted and ruled her out as a suspect in her parents’ killings.

WHAT ARE AUTHORITIES DOING?
Barron County Sheriff Chris Fitzgerald said more than 200 law enforcement officers are on the ground daily and authorities have cleared more than 1,400 leads and continue to pursue others.

Some tips led officials to recruit 2,000 volunteers for a massive ground search, which has yet to turn up anything of value. Authorities are also seeking information on two cars — a red or orange Dodge Challenger and a black Ford Edge or black Acura MDX — that may have been near the family’s home on the night of the attack. And they are asking anyone who was on Highway 8 early on Oct. 15 to call the tipline to see if they can offer any information.

Fitzgerald said Wednesday that a new evidence team went through the house to make sure nothing had been overlooked and that it removed some items that were being processed. Authorities are also still reviewing the 911 call in which no one spoke to dispatchers. The call was made from Denise Closs’ cellphone.

Rick Thornton, a former head of the FBI in Minneapolis who is not connected to the case, said authorities are also likely interviewing witnesses and associates, examining social media accounts, computers and other devices, and analyzing cellphone traffic from the area. He said the real challenge for investigators is prioritizing what leads might be most likely to bear fruit. Another challenge is managing it all and making sure that someone takes a look at what is found to try to connect the dots.

Thornton also said investigators might know more than they are releasing to the public, and that they need to strike a balance between keeping the public engaged and protecting the investigation.

Thornton said in any criminal probe, the first 48 hours are critical to getting a quick resolution. But no matter how long it takes, investigators will not give up on missing children cases and will be motivated to follow any lead that comes in.

“You don’t lose hope on these things,” Thornton said. “You keep following the leads that come up.” He said it only takes one lead to go from an unsolved case to “all of a sudden you are on the fast track to a resolution.”
Thornton led the FBI’s Minneapolis office when the remains of Jacob Wetterling, a boy who was kidnapped in Minnesota in 1989, were found in 2016. He said that despite the decades of not knowing what happened, he always held out hope that Jacob would be found alive.

Bob Lowery, vice president of the National Center for Missing and Exploited Children, said: “As time goes on … it becomes more difficult to find these children, but it doesn’t mean that we don’t.”

Three women and girls — ages 14, 16, and 21 when they were abducted from 2002 through 2004 — were found in a Cleveland home in 2013 after one of them screamed for help. Thirteen-year-old Ben Ownby was found four days after he was kidnapped in 2007, and his discovery in Missouri led authorities to Shawn Hornbeck, who was kidnapped four years earlier.

Lowery said, “until we know for certain, we can never give up hope.” Jayme’s aunt, Jennifer Smith, addressed her niece directly at a news conference on Wednesday, saying the family missed her giggles, and her grandpa needs more artwork for his refrigerator.

“Jayme, not a moment goes by that we’re not thinking of you and praying for you,” Smith said. “We need you here to fill that hole in our hearts. We will never stop looking for you.”