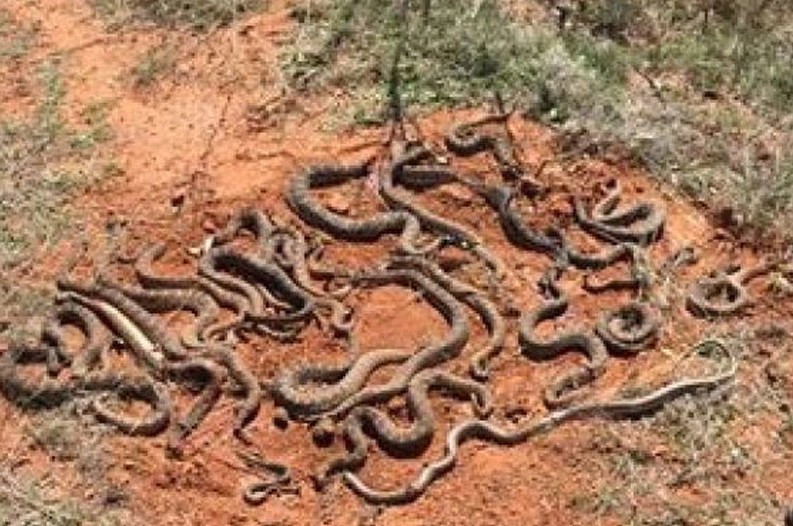 This is the last thing you want to see when you pick up your deer blind.

According to My San Antonio, a group of Texas hunters in Matador, Texas(a city right outside of Lubbock, Texas), discovered a nightmarish scene: 26 slithering rattlesnakes and one they couldn’t identify hiding under their deer blind. This is definitely a different kind of hunting game.

Hunter Rusty Hopper had posted photos of the scene on Facebook, and was responding to the virality of his social media content. However, the viral Facebook post has since then been made private. He had also tagged three other men: Craig Turner, Brett Turner and Chad Guthrie. Crazy enough, the rattlesnakes weren’t the only things that make the toughest Texans squirm out there in West Texas.

Rattlesnakes account for most of the 7,000-8,000 venomous snakebites that happen in the U.S. every year. According to The Texas Parks and Wildlife Department, rattlesnakes are secretive and shy. They are elusive creatures that tend to avoid conflict, and often hide under places like deer blinds, sheds, wood piles, livestock pens and litter piles. It’s not surprising to find them coiling underneath stuff like deer blinds because they like to stay out in the open.

If you should have the misfortune of uncovering a rattlesnake pile, stay calm and walk away. Try to make as little sudden movement as possible. The snakes will most likely slither away because they’re trying to get away. Also, always wear your boots and long pants when you’re hunting in rural areas, but you probably knew that already. I mean, after hearing this, who knows how truly careful you should be out there. I know that I would have to watch my every step.

Stay safe out there, Texans. You guys are brave ones.

Editor’s note: This article was originally published on September 30, 2018.